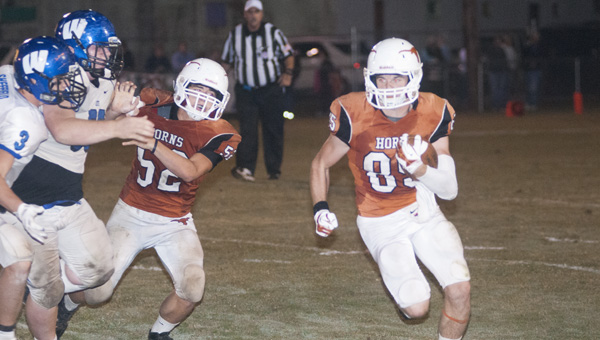 Shade Pritchett carries the ball around the left side for Marengo Academy in Thursday’s game against Wilcox Academy. Pritchett ended the game with 149 yards rushing on four carries.

The Marengo Academy Longhorns took control of AISA Class AA, Region 2 with a 47-10 win over Wilcox Academy on Thursday.

Wilcox kept it close through the first half, but the Longhorns pulled away in the second half for a convincing win.

“In the first half, I think we were trying to finesse too much,” MA head coach Robby James said. “In the second half, we got back to what we know. We made some mistakes early, but I thought our defense played really well the whole game.”

MA opened scoring with 6:58 to play in the first quarter on a 1-yard run by Hayden Huckabee that was set up by an interception by Andrew Martin. The extra point was no good, and the Longhorns led 6-0.

The Wildcats answered back on a 37-yard pass for a score from Drake Lauderdale to Clay Sheffield. Lauderdale hit the extra point attempt to give Wilcox a 7-6 lead with 1:12 to play in the opening quarter.

The Wildcats forced an MA punt were able to drive down into field goal range. Lauderdale hit a 28-yarder to put Wilcox on top 10-6 early in the second quarter.

A forced fumble and recovery by Wallace Tutt gave the Longhorns good field position on the Wildcats 11 yard line. With 1:34 to play in the half, Huckabee ran it in from six yards out to give MA the lead. Huckabee found Shade Pritchett in the endzone to convert the two-point conversion and give the Longhorns a 14-10 lead going into the half.

In the second half, it was all Longhorns. A 53-yard Pritchett run opened the half, and the drive was capped off with a 5-yard TD run by Josh Holifield. Kyle Friday converted the extra point to put MA ahead 21-10 with 11:34 to play in the third quarter. 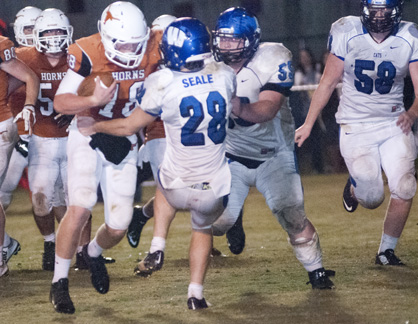 On the first play of the fourth quarter, Huckabee connected with Pritchett on a 32-yard pass for a score. After a bad snap, the extra point was no good and the Longhorns took a 34-10 lead.

On the next Wildcats drive, Cason Cook forced a fumble on a sack, and Carson Huckabee recovered it and ran it in from 19 yards out for a score, giving MA a 40-10 lead.

The final score of the game came on a 2-yard Holifield run with 5:19 to play. Friday converted the extra point to give MA the 47-10 lead.

“I’m really proud of our team,” James said. “Wilcox came in here to win tonight. They’re a good football team. This was a good win for us. We’re No. 1 in the region now. We need to rest up for a long road trip to Abbeville next week.”

Defensively, Hayden Hall led the way with 15 tackles. Carson Huckabee had 9 tackles, a fumble recovery and a touchdown.