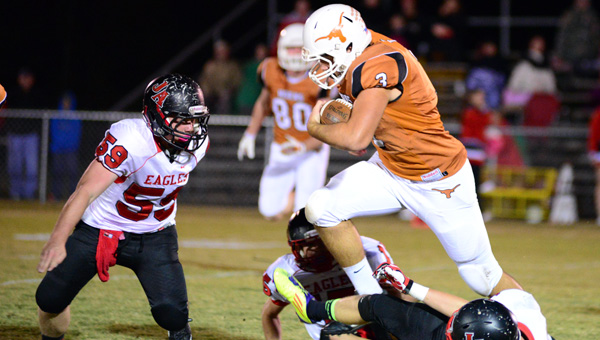 The only question at Linden Athletic Field Friday night was if the concession stand would sell out of hot chocolate.

Marengo Academy made sure there were no questions on the field.

The Longhorns (8-1) breezed past Class A Jackson Academy 49-0 in their regular season finale.

“You can always find things you need to work on, but I thought out kids played well,” MA head coach Robby James said. “Jackson has a scrappy team and I hope they do well in the playoffs. We just have to try to keep getting better and not get complacent.”

The win was the eighth straight for the Longhorns, whose lone loss came to Class AAA Bessemer Academy in the season opener.

It also marked the eight consecutive game in which the Longhorns have scored at least 40 points.

MA wasted little time in getting on the scoreboard Friday night.

Just one minute into the contest, junior quarterback Hayden Huckabee shook a tackler near midfield and raced to the end zone for the score and a 6-0 lead.

Huckabee added a second score at the 7:14 mark of the first quarter when he raced 47 yards for a touchdown. He then connected with senior wide receiver Alston Dinning for the two-point conversion and a 14-0 lead.

Senior Josh Holifield got into the act late in the opening stanza when he rumbled 22 yards for a touchdown to extend the Longhorns’ lead to 20-0.

Even the defense got in on the act.

With 10:48 to play in the second quarter, Cason Cook scooped up a Jackson Academy fumble and sprinted 20 yards for a touchdown. Huckabee added the two-point conversion and the Longhorns led 28-0.

Huckabee scored his third and final touchdown of the contest at the 1:50 mark of the second quarter. This time he raced in from 22 yards out. Senior Kyle Friday booted the extra point through the uprights to give MA a 35-0 lead heading into the intermission.

In the second half, senior Ralph Langley and sophomore Weldon Aydelott tacked on touchdown runs of 21 and 22 yards, respectively. Friday converted both point after attempts.

The shutout was the fourth of the season for the Longhorns.

“I feel good about where we are, but we’ve got to keep getting better every week,” James said.

Marengo will take on Springwood School in the first round of the playoffs next Friday in Linden. Kickoff is set for noon.