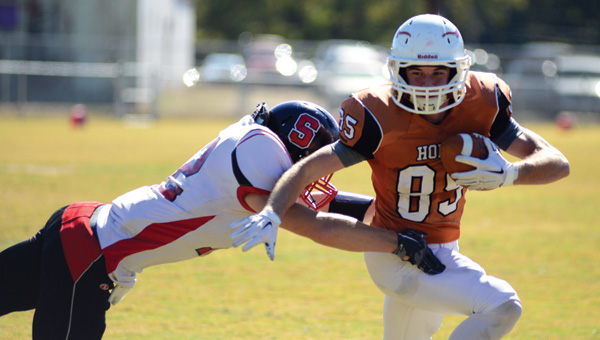 Marengo Academy senior Shade Pritchett fights for yardage during the Longhorns’ 62-0 win over Springwood Friday in the first round of the AISA playoffs. (Times Staff/Andy Brown)

The Longhorns (9-1) breezed to a 62-0 victory over Springwood School at Linden Athletic Field in the first round of the AISA playoffs in a game that kicked off at noon.

“I’m proud of our kids,” MA head coach Robby James said. “Playing in the middle of the day is a lot different atmosphere than what they are used to, but they handled it well.”

That may be an understatement.

The Longhorns scored on their first nine possessions and were forced to punt just once during the contest, which was shortened by a running clock in the second half.

The Longhorns have now scored at least 40 points in their last nine games. Friday’s 62 points were a season high.

Early in the contest, the Wildcats (7-5) loaded the box with 11 players to try to slow down MA’s offense.

While that strategy failed to keep the Longhorns out of the end zone, it did force MA to convert on a pair of fourth downs during its opening drive, before junior Hayden Huckabee broke free for a 27-yard touchdown run.

“I felt like we got off to a good start,” James said. “They seemed to disregard the pass, but I felt like all in all we came out and played well.”

The second quarter proved to be more of the same.

Once again, Huckabee got the offense rolling with a 31-yard scoring run. An 8-yard run by senior Josh Holifield, followed by touchdown runs of 13 yards and 75 yards by senior Ralph Langley and Huckabee, respectively, pushed MA’s lead to 55-0 by the intermission.

At the start of the third quarter, sophomore Robert Tutt became the third Longhorn signal caller to toss a touchdown pass when he connected with senior Will Allen for a 59 yard score.

Defensively, the Longhorns were stingy.

The Longhorns also stopped the Wildcats at the 1-foot line early in the fourth quarter.

For much of the contest, the Wildcats found themselves moving backwards as the Longhorns brought relentless pressure.

The Longhorns will now face the winner of the Lakeside School/Clarke Prep game.

The winner of that game will advance to the Class AA state championship game in Troy.