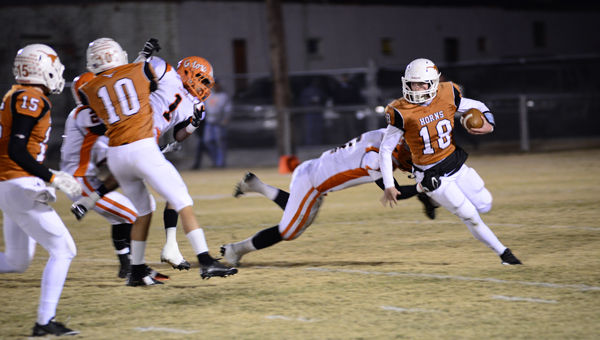 Marengo Academy’s Hayden Huckabee attempts to break a tackle in Friday night’s win over Clarke Prep. Huckabee had a kickoff return for a touchdown and two long touchdown runs in the game.

The Marengo Academy Longhorns will make their second trip to Troy in as many years to play for a state championship.

The Longhorns defeated Clarke Prep 42-8 Friday night to earn a chance to play for the AISA Class AA title next Friday at noon.

“It’s always your goal to make it to state,” MA head coach Robby James said. “We’ll have a big one next week. I’m proud of our team and our school.”

Marengo Academy held the Gators scoreless for 47-and-a-half minutes in Friday night’s game before giving up a late touchdown pass.

Other than their final drive, though, Clarke Prep struggled to move the ball against MA’s defense.

The game started off with a bang for the Longhorns as Hayden Huckabee returned the opening kickoff 92 yards for a score. Kyle Friday missed the extra point, leaving the Longhorns with a 6-0 lead.

On Clarke Prep’s first drive, they were forced to punt. Marengo’s Cason Cook was able to get in the backfield and block the punt, giving the Longhorns great starting field position at the Gators’ 32 yard line.

On the Longhorns’ first play from scrimmage, Josh Holifield took a handoff 32 yards for a touchdown. Huckabee added the two-point conversion on a run to put MA ahead 14-0 with 8:51 to play in the opening quarter.

With both teams running the ball a majority of their plays, time ticked off the clock quickly in the game. Marengo’s next score came midway through the second quarter on a 68-yard touchdown run by Huckabee. Friday converted the extra point to put MA ahead 21-0. 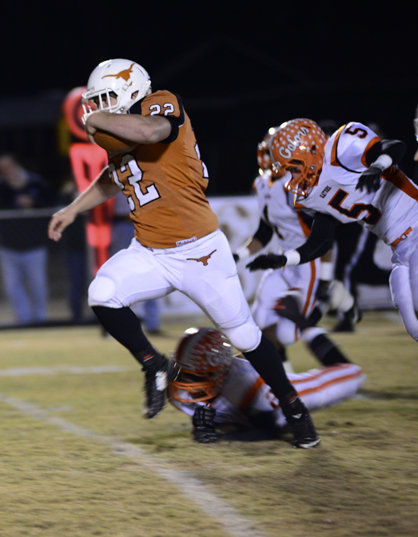 Josh Holifield breaks through for a touchdown run in the first quarter of Friday’s game.

Late in the half, the Longhorns added another score on a 3-yard TD run by Holifield. After Friday converted the extra point attempt, MA led 28-0, which held until halftime.

In the third quarter, the Longhorns scored on a 50-yard fake punt run by Huckabee to give them a 35-0 lead.

With 5:19 to play in the game, the ‘Horns scored their final touchdown on the game on a 35-yard run by Weldon Aydelott.

The Gators were able to get on the board with 32 seconds to play in the game on an 11-yard pass from Trey McConnell to Grey Tucker. Zach Gregson ran in the two-point covnersion to make the score 42-8.

“I thought we played well tonight, even though it was some of the coldest weather we’ve played in,” James said. “Any time you play the same team in the same year, it’s easy to come out flat, but I thought we came out strong and played well.”

The Longhorns will face Edgewood Academy at noon in Troy next Friday night. Edgewood is riding a 57-game winning streak going into the championship game.

“They score a lot of points, so it’ll be a game that field goals won’t work,” James said. “When we get down in the redzone, we’ll need to score touchdowns. I hope to go down there next week and get a victory.”