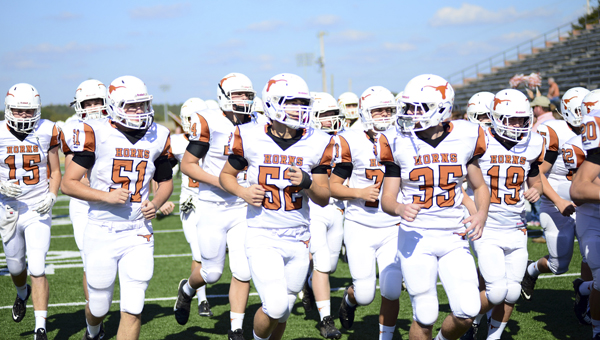 The Longhorns take the field before the AISA Class AA state championship.

It just wasn’t the streak Marengo Academy was hoping to see end.

Edgewood Academy defeated the Longhorns 55-25 in the Class AA championship game. The loss snapped MA’s 10-game winning streak, while giving the Wildcats their 58th consecutive win and their fifth state championship in a row.

“Everyone wants to win the last game of the year, but I’m proud of our guys,” MA head coach Robby James said. “They fought hard and never quit.”

The Longhorns (10-2) took the fight to the Wildcats early.

On the game’s opening possession, MA drove 65 yards for a score on a drive that featured just one pass.

The Longhorns simply lined up and ran right at Edgewood.

Senior running back Josh Holifield capped the drive by barreling his way into the end zone from 1 yard out. Senior Kyle Friday’s extra point gave the Longhorns a 7-0 lead.

The lead was relatively short lived, however.

Following a stalled drive by the Longhorns, the Wildcats scored on a 10-yard pass from Bottoms to senior wide receiver Tyler Matthews. The score gave Edgewood a 14-7 advantage.

With time winding down in the first half, the Longhorns launched another attack. 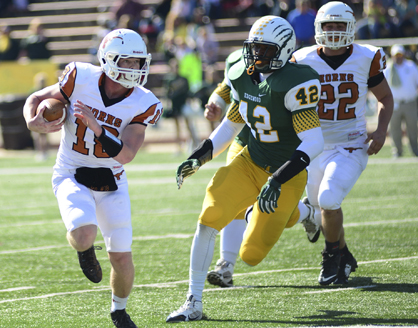 Hayden Huckabee tries to run past an Edgewood Academy defender in the Longhorns’ loss Friday afternoon in the AISA Class AA championship game.

Behind the strong running of Holified and junior Hayden Huckabee, MA marched down the field. Holified once again did the honors with an 11-yard scamper into the end zone.

The point after attempt failed after a high snap, leaving the Longhorns a point behind the defending champions.

“I thought we ran the ball well,” James said. “With our type of offense, we try to control the ball and we were able to do that.”

It proved to be big plays that sank the Longhorns.

In the second half, Edgewood scored on three plays of more than 20 yards and also converted two fourth downs on fake punts.

“All in all, we didn’t tackle well,” James said. “They were good in space. I don’t know if in all my career I’ve played a team with that many athletes.”

Edgewood scored 27 unanswered points to begin the second half and seize control of the game. 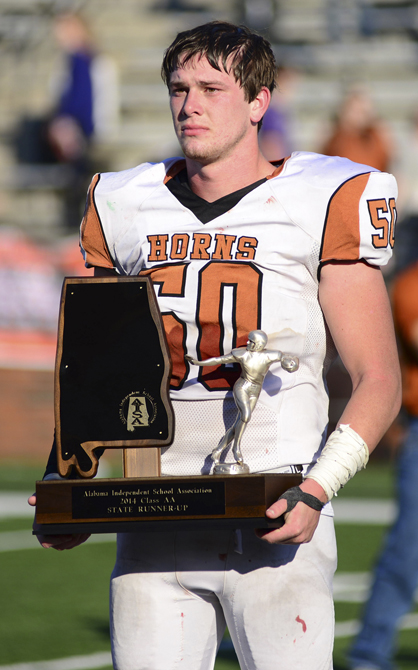 Edgewood head coach Bobby Carr said he never doubted his team would find a way to win, even against a tough opponent like MA.

“We knew they’d be tough and well coached, but our kids found a way to stand tall,” he said. “That’s what champions do.”

While the Wildcats seized control of the game following halftime, James said he was proud of the effort his team showed in the second half.

“They kept fighting,” he said. “(Edgewood) is off the charts with talent, but our kids played hard the whole game. I’m proud of them and the support we had here today.”

The first came on a 76-yard kickoff return.

The kick was fielded by senior Andrew Martin on the left hash mark. He sprinted right, bringing the defense with him, then handed the ball to a streaking Shade Pritchett who raced down the left sideline for the score.

The two-point conversion failed and the Longhorns trailed 41-19.

MA’s final score came on a 15-yard touchdown pass from quarterback Tyler Barkley to Pritchett. The two-point conversion attempt was no good.