She was born Jan. 22, 1922, one of four children to the late Hugh and Bessie Wilburn. She spent her youth in Demopolis, graduating from Demopolis High School and Draughn Business College in Montgomery. She married James Albert Norris Sr. on Feb. 1, 1942, and made their home in Jefferson where they raised four children. She was a loving and caring wife and mother. 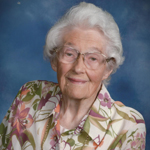 After graduating, she began working at the Marengo County ASCS office and later served as Postmaster of the Jefferson Post Office for 40 years.

She has loved and been an active member in the Jefferson Baptist Church for 72 years. She taught Sunday School and served as church treasurer for more than 60 years. She was also a member of the choir.

She was a wonderful cook, noted for her chicken pie and caramel cakes. She also greatly enjoyed gardening, canning, freezing, making preserves and working in her flowers. She was very interested in genealogy and was always glad to help others trace their family histories.

Funeral services will be held Sunday, Dec. 21, at 2 p.m. at Jefferson Baptist Church with the Rev. Daniel Gandy and the Rev. Tony Antonelli officiating and Kirk Funeral Homes Demopolis Chapel directing. Burial will follow in the Jefferson Community Cemetery. Visitation will be held from 1-2 p.m. at the church.

Memorials may be made to the Jefferson Community Cemetery Fund, 25614 Alabama Highway 28, Demopolis, AL 36732.