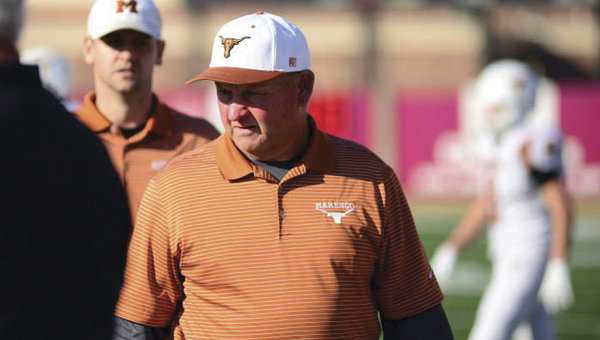 Marengo Academy headmaster and head football coach Robby James announced his retirement Wednesday in a meeting with his players.

“After the season this year, I just was talking with my wife, and I just decided I wanted to spend more time with her and my grandkids,” James said. “I just turned 65 in November, and when you start looking at all the things that start to happen at this age, I felt like it was time to spend more time doing some things I’ve wanted to do while I still can.”

In his six years with the Longhorns, James compiled a 39-30 record with two state championship game appearances and the 2013 AISA Class A championship. He led the Longhorns to a 25-2 record in the last two seasons.

“Looking back on it, I didn’t set out to coach, but I was approached to coach at Catherine and decided to do it,” he said. “I never regretted that decision. I’ve enjoyed my time coaching. The biggest thing I enjoyed was being with the boys. All the boys I’ve had come through the program and being able to watch them grow, that’s been very rewarding. Everywhere I went, we kind of started slow and built the programs up, eventually getting to the ultimate goal of a championship. It’s been fun to see the progression of the players, and hopefully I’ve done something that’s helped some of them.”

James will finish out the academic year as the headmaster at Marengo Academy and will assist with the weight program until a new coach is hired.

“I’ve talked with the board, and I’ll be working with them to find a good replacement as headmaster and football coach,” he said. “I’ll also be helping coach (Webb) Tutt with the weight program.”

James said that while he isn’t sure what he’ll do during retirement, he said he wants to spend more time with his wife and five grandchildren.

“I’ve been on a schedule for pretty much 40 years, so it will be nice to come and go when I want,” he said. “I hope to stay in the area, and I want to pay attention to these guys and watch them play some next season.”

He added that his successor will have a good group of players to work with.

“Whoever comes in will have a good group of guys,” James said. “We’ve got a lot of returning starters who have gone 25-2 in the last two seasons. There’s a good nucleus of players. If they work them hard, they’ll have a good team.”