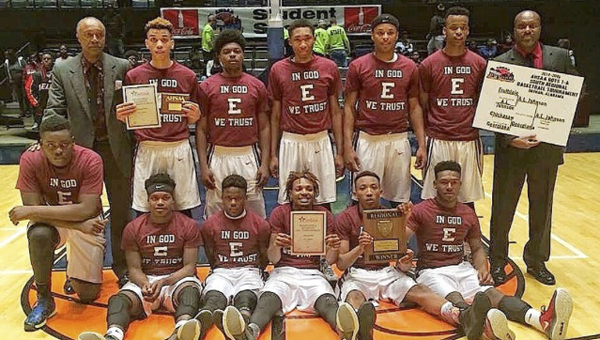 The A.L. Johnson Eagles reached the Class 1A state semifinals with a 72-68 win over Georgiana Tuesday.

The A.L. Johnson Eagles made history Tuesday night when they defeated Georgiana 72-68 in the Class 1A South Regional Final.

With the win, the Eagles reached the state tournament for the first time in school history. ALJ also became the first boys team from Marengo County to ever reach the state final four, according to Eagles head coach Johnney Ford.

In the game against Georgiana, the Eagles led throughout the first three quarters and took a 54-50 lead into the final stanza.

The Panthers went on a 17-4 run to open the fourth quarter and take a 67-58 lead with 3:24 to play in the game. ALJ’s defense clamped down and the Eagles started climbing back into the game.

“I called a timeout when they were making their run, and I told our guys to just slow it down and play our brand of basketball,” Ford said. “I told them to not let Georgiana dictate the brand of ball we were playing, and we were able to come back and win. We out-hustled them and went on a 14-1 run to win.”

On their next possession, Jeremy Mitchell was fouled and made one of two free throws to close the gap to 6 points. A Shermon Kennedy steal led to a Leo Baker three-pointer with 2:39 to play to cut the lead to three.

Mitchell made a steal on the Panthers’ next possession and was fouled on a shot attempt. He made one of two from the charity stripe to make the score 67-65 with 2:05 to play.

Charles Edwards tied the game with 1:30 to play, and the Eagles regained the lead with 53 seconds to play on a Kennedy bucket.

Georgiana broke their scoreless streak with a free throw by Travales Smith, who made one of two at the line with 38 seconds to play.

Edwards made two free throws on the Eagles’ next possession, and Kennedy scored the final point of the night on a free throw with 5 seconds on the clock.

“It all started with football season,” Ford said. “We had some discipline problems, and for the first time, we held tryouts for basketball. I was able to select good-character guys, and I told them all year that we had the talent to win state and the only thing that could stop us was our attitudes and discipline. I’ve told them all year that it’s not over until the last second ticks off the clock, and they’ve bought into what I have told them.”

Kennedy was named the Region Tournament MVP, due in large part to his 28-point, 13-rebound effort Tuesday night.

“I called him the other day and talked to him, told him his scoring had dropped off and he needed to get focused and pick up his game,” Ford said. “He came out and hit a couple of threes and that was big for us right off the bat.”

Ford said his players were used to playing in close games because they’ve played in them all season, but he felt like Georgiana didn’t have that experience.

“We’ve been in plenty of tight games this season and knew how to react to it,” he said. “I think we had an advantage in that area.”

The Eagles will face Sacred Heart (26-8), the Northeast Region champs, on Monday at 1:30 p.m. at the BJCC in Birmingham in the state semifinals.

“We’re going to keep taking it one game at a time,” Ford said. “The kids are confident and have bought into what I’ve been telling them. We have to play our brand of basketball and not be forced into playing another brand of ball.”