A banner day in Thomaston 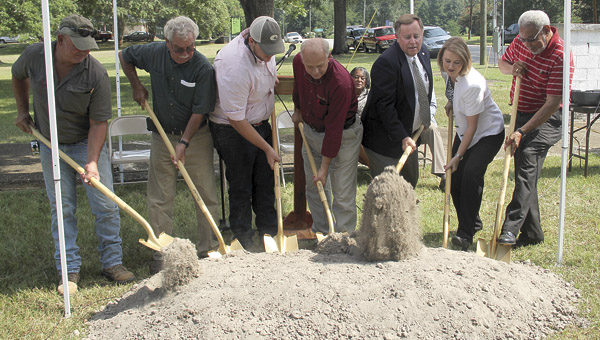 Years of searching and planning led to a banner day in the Town of Thomaston Friday when officials from across the region gathered for the ceremonial groundbreaking of a new grocery store.
Dave’s Market, which has an existing location in Valley Green, Alabama, will begin renovations on an already existing structure in Thomaston. Owner David Oliver said he hopes the store will be open by November 1 and said the market would begin with 18 employees.
Along with Oliver, those on hand for the event included: Thomaston Mayor Jeff Laduron, Marengo County Industrial Development Board Chairman Malcolm Sanders, Marengo County Economic Development Authority Director Brenda Tuck, Marengo County Commission Chairman Fred Armistead, Valerie Day of Senator Jeff Sessions’ office, and Kennard Randolph or Representative Terri Sewell’s office.
“In 2008, I took office with a dream of making Thomaston a better place. We done a lot of things to get to this point and we aren’t stopping now; we are going to keep working,” Mayor Laduron said.
Laduron thanked many for their efforts in bringing Dave’s Market to Thomaston, including Oliver.
“It’s been an absolute pleasure working with him and getting to know him. I thank him for believing in Thomaston and making our dream come true,” he said.
Dave’s Market will fulfill a long-standing item on the Thomaston wish list.
“The people of Thomaston have been waiting for this 20 years,” Tuck said. “When I came to the EDA in 2012, I was told this community waned something local and convenient so residents wouldn’t have to drive for fresh produce and meat. This will increase the tax base for Thomaston and Marengo County and is a great accomplishment for this town.”
Thomaston has been identified by the USDA as a “food desert,” according to Tuck, based on being 10 miles or farther from fresh produce. Options for groceries often lead residents there to go out of county to stores in Thomasville, Union Town, or Selma.
The Town of Thomaston will own the land around the grocery store and applications have been filed with USDA Rural Development along with the Alabama Department of Economic and Community Affairs to help fund the improvement of public areas, such as the parking area and improving roads leading to the market.
The structure, the old Marengo County High School gymnasium, is serving as inspiration to create a shopping experience unique to Thomaston. While the building lacks a roof right now and has been empty for years, soon its floors will be painted like basketball court hardwood, basketball goals will be put in place and the original lighting fixtures with updated bulbs will tie the market to the building’s past with a fresh new look.
County Commission Chairman Fred Armstead said Friday’s groundbreaking is the culmination of hard work by many people.
“I’ve driven by this building so many times and it appears nothing is going on, but there is always something going on. People are working behind the scenes, which leads to an event like this. It is a big day for Thomaston and a big day for Marengo County as well,” Armstead said.
IDB Chairman Malcolm Sanders also congratulated those who worked on the project.
“I want to thank everyone who made this day a reality,” Sanders said. “This has been years in the works, not just months or days. We invite everyone back in a few months for the grand opening of our new Dave’s Market.”

For this story and more see the Saturday, August 8, print edition of the Demopolis Times.