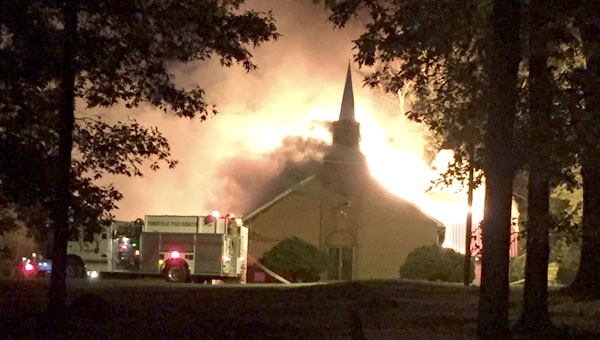 Gilfield Baptist Church is considered a total loss after a fire Tuesday night. The State Fire Marshall’s Office has determined that lightning caused the fire.

Tragedy struck the Gallion community when Gilfield Baptist Church, a pillar of that community since the 1960s, burned down Tuesday night.
Considered a total loss, not much more than charred bricks are all that remain of the structure that housed a congregation of about 60 members.
“A lot of history and memories were lost in that fire,” said Pastor Dewayne Charleston. “The members are broken hearted, but we are going to keep going with our heads up and will ask God for future direction.”
The fire itself is believed to have started around 8 p.m. after a round of strong storms entered the area. Thursday afternoon State Fire Marshall Ed Paulk determined lightening was the cause of the fire.
“A lightning strike of significant magnitude was detected at the location of the church shortly before the fire was reported and we’re now listing the cause of this blaze as lightning,” said Paulk.
An account has been setup at Robertson Banking Company in Demopolis to help the church raise money for a new building under “The Gilfied Missionary Baptist Church Special Building Fund.” All donations are welcome.

For more details see the Saturday, August 22, print edition of the Demopolis Times.