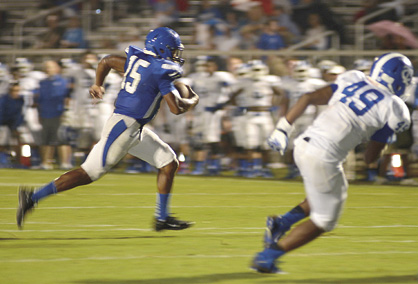 Starting Quarterback Jamarcus Ezell carries the ball on his way to the pylon for a touchdown. Ezell finished with two touchdowns on the ground.

Ground and pound was the name of the game for Demopolis High School as the Tigers amassed over 200 yards on the ground to collect a 21-16 victory in a jamboree tilt against Tuscaloosa County in Tiger Stadium.
The new look Tigers played their first game in the Wing-T under Coach Stacy Luker against other competition. DHS collected 213 yards on 43 rushing attempts finishing with 242 total yards.
“We have practiced physical and we’ve done some good things on the practice field,” said Luker.
The Tiger defense truly showed physicality holding the visiting Wildcats to just three points before the reserves for both teams took the field.
“I thought they played well,” Luker said of his defense. “They ran to the ball fast, which is what we’ve been preaching to them. Be simple and be fast. It’s a good group and I said a couple of weeks ago it could be the strength of us.”
Tuscaloosa County was first to score with a field goal in the second quarter to give the Wildcats a 3-0 advantage.
DHS responded with just over six minutes remaining before the half when Jamarcus Ezell pushed the pile on a quarterback keeper to the end zone. The point after attempt was good to give the Tigers a 7-3 lead.
Ezell would then score from about 10 yards out on a read option around the left side with around 30 seconds left to give the Tigers a 14-3 halftime lead.
Both teams’ starters would only play a couple of series in the second half and the offenses went quiet.
William Wilkins broke the silence with a long scamper down the right side of the field for a touchdown. The following extra point conversion gave Demopolis a 21-3 advantage.
The Wildcats made it interesting scoring 13 consecutive points over the final 17 minutes, but could not get one more score as time expired.
“They had us a little nervous, but the young guys bowed up and held them out,” said Luker.
Wilkins finished as the leading rusher in yards thanks to the long third quarter touchdown as the junior finished with 84 yards on three carries. Jay Craig carried the ball 11 times for 63 yards and Ezell totaled three yards on eight carries but finished with the two touchdowns.
Junior safety Logan McVay finished as the leader in tackles with three solo tackles and two assists. McVay also came away with an interception. Rahmeel Cook came away with one solo tackle, three assists and a quarterback sack.
Tuscaloosa County finished with 262 total yards with 159 of them on ground on 35 rushing attempts. The Wildcats were aided by DHS penalties with 12 calls going against the Tigers for 113 yards, while Tuscaloosa County was penalized eight times for 72 yards.
“We have to get our penalties cleaned up, because we really hurt ourselves,” Luker said.
Demopolis will kickoff the regular season August 28 on the road against the Thomasville Tigers, who collected a 34-6 victory over Sweet Water.
“It’s a long season, a long grind and I’m excited about this football team,” Luker said.