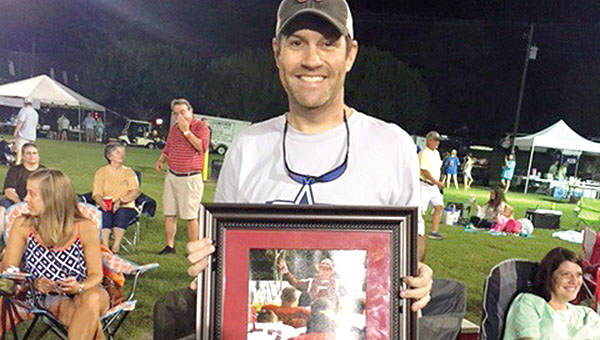 Dan Harper was presented with a photograph of Nick Saban during a fundraising event held in his honor. Harper was recently diagnosed with colon cancer.

The community of Demopolis came together Saturday for a special event designed to help one of their own who is battling cancer.
The “Small Town Throw Down for Dan” was held Saturday at the Demopolis City Landing and featured live entertainment, a silent auction, raffles, activities for children and a water balloon throw with targets including Mayor Mike Grayson, Police Chief Tommie Reese, District Attorney Greg Griggers, Vernon Waters and others.
The event was planned as a fundraiser for Dan Harper who was recently diagnosed with stage 4 colon cancer. He and his new wife, Timie, had just gotten married when they received the diagnosis. The Throw Down for Dan was an event planned by group of local residents looking to do something to help.
“A group of us got together wanting to do something to help,” said Caitlin Bambarger, one of the event organizers. “The number of people involved kept growing and we ended up with about 15 people working together to organize the event.”
The organizers estimate that the event raised about $10,000.
“(The event) was a huge success. We were very pleased that Dan was able to attend and he was presented with a photo of Nick Saban and he thanked everyone for their support,” Bambarger said.
Organizers were very pleased with the turnout.
“We want to thank the community for coming together and showing its support for Dan and Timie. We had a lot of sponsors and volunteers. We want to thank those who volunteered for the water balloon toss, which was a big hit. The community really came together to make this a very successful event,” Bambarger said.