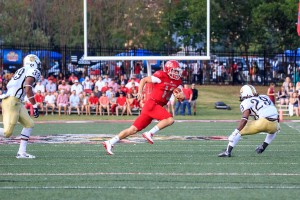 Trent Thompson scrambles away from the Stillman defense. Thompson finished with 234 passing yards and two touchdowns.

With a near capacity crowd on hand for the second installment of the Tiger Bowl, the University of West Alabama Tigers used stifling defense to hold the Stillman College Tigers to just 182 yards and collect a season opening win 52-9 in Tiger Stadium.

The UWA defense nearly accomplished that goal holding the Stillman rushing attack to negative two yards rushing in the first half, but relenting in the second half, giving up 42-yards on the ground.

“We want to be vicious. We want to be known as a grimy defense and opponents are scored of us coming into the game,” said Harton

UWA opened with decent field position starting on its own 39-yard line and was able to take it all the way to the Stillman 4-yard line before settling for a 21-yard field goal by Garrett Mattix to give them an opening 3-0 lead with 9:16 to go in the opening quarter.

Stillman quickly responded as Li’Jon Codier found Malik Williams wide open in the middle of the field for 66-yard touchdown. Aaron Hamber tacked on an extra point to give the visiting Tigers a 6-3 lead with 7:04 remaining.

Harton said, “It was a busted coverage. We were mad at first, but that was only thing we gave to them.”

West Alabama opened the second quarter on the Stillman 3-yard line and found the end zone two plays later on a Rashard Lee run in the middle of the field. Mattix connected on the extra point to give UWA a 10-7 advantage.

Stillman and UWA would trade receptions until West Alabama started the drive at midfield with 3:45 remaining in the first half. Five plays into the drive, Thompson delivered a pass to Randy Satterfield who out jumped his defender in the end zone for a 32-yard touchdown. Mattix nailed the extra point to give West Alabama a 17-7 lead.

“I was waiting for it for the longest time. Hurry up and get here was all I was thinking,” said Satterfield.

With just over a minute before the half, the West Alabama defense forced Stillman to punt giving UWA another possession at midfield. Once again, the Tigers took advantage using seven plays, capped by a 1-yard pass from Thompson to Satterfield and give UWA a 24-7 halftime advantage.

West Alabama rolled to 325 yards of total offense in the first half, playing over double the amount of offensive snaps with 50 compared to 24 offensive plays for Stillman.

“Offensively it took us a little while to get going. I felt like we could have widened the gap a little sooner,” said Head Coach Brett Gilliland.

With 13:05 in the third quarter, Codier fumbled a snap in the shotgun and Darius Ellis recovered for West Alabama on the Stillman 27-yard line.

The Tigers capitalized when Lee bounced off several tackles on his way for a 4-yard touchdown run. Another conversion by Mattix gave West Alabama a 31-7 advantage.

UWA forced another turnover on the following Stillman possession when Chris Davis picked off a pass from Hudson Cain, who came in for relief for Codier, on the Tigers’ 8-yard line. However, the interception led to a defensive opportunity for Stillman as the defense forced a safety by sacking Thompson in the end zone trimming the UWA lead to 31-9.

With 6:25 remaining in the third quarter, Ty Hill got the big return he was searching for all night returning a Dean Kelly punt 88-yards for a UWA touchdown and after another PAT conversion by Mattix, the hosting Tigers had a 38-9 lead.

That would be the last snap for Thompson who finished 19 of 26 with 234 yards with two touchdowns.

“We played well. It’s definitely a lot of things we could do better though,” said Thompson who didn’t know he was starting the game until after the team dinner Friday night.

“We felt like he led the team and did things that gave us the best chance to win,” Gilliland said.

Dezmond Huntley came in for relief of Thompson and kept the ball on an option play, scampering 39-yards to push the UWA lead to 45-9 after a Mattix PAT conversion.

“We wanted to get Dezmond and Harry (Satterwhite) in the game sooner, but it didn’t happen because of the flow of the game,” said Gilliland.

Scoring continued in the fourth quarter for UWA with 7:49 to when Brent O’Neal took a handoff up the middle for a 3-yard touchdown to extend the lead to 52-9 after another successful Mattix conversion. This would serve as the final score of the contest.

Defensive numbers were spread, but Harton amassed the most tackles with six including one for a loss.

West Alabama collected 496 yards of total offense having a nearly even spilt in collecting them with 249 on the ground and 247 through the air.

Gilliland said, “Overall it’s a good performance. Anytime you put up 52 points you feel good about it.”

Li’ Jon Cordier finished with 117 yards and a touchdown, completing 8 of 14 passes to lead the Stillman College offense.

Michael Herrod led the defense for Stillman with 10 solo tackles. Demopolis High School alumnus Wiley Isaac finished with three tackles, two of which were for losses.

UWA (1-0) won’t have much time to celebrate the Tiger Bowl II victory, as the Tiger’s have to prepare for a Thursday night affair in Tiger Stadium against NAIA opponent Cumberland.

“We’ll start installing stuff for the game Sunday and on Monday we’ll probably have our heaviest practice of the week,” said Gilliland.

Kick-off is scheduled for 6 p.m. in Livingston. 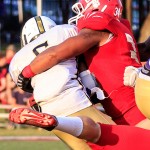