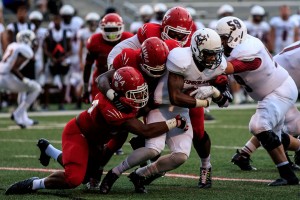 The University of West Alabama Tigers (2-0) used a strong second half scoring 27 unanswered points to defeat the Cumberland University Bulldogs (1-0) 34-8 in Tiger Stadium.

UWA surged to 242 yards of total offense in the final half and held the defense held the Bulldogs to just 10 total rushing yards.

“Our D-line was getting great penetration off the ball and the o-line couldn’t get to us,” said linebacker Quentin Harton.

UWA hit the scoreboard early in the first quarter when Trent Thompson avoided a sure sack from a Cumberland blitz found his receiver Randy Satterfield in the back of the end zone. Garret Mattix would add the extra point to give the Tigers a 7-0 lead with 9:38 on the clock.

Cumberland’s defense stood tall on the next UWA possession forcing a three and out from the offense. Nathan Anderson rewarded the Bulldog defense blocking a Jordan Ikner punt that rolled out of the back of the end zone for a UWA safety to cut the Tiger lead to 7-2 with 5:53 remaining in the opening quarter.

Early in the second quarter, CU attempted a fourth down conversion, but was stopped for no gain by Quentin Harton for the UWA defense. However, the Tigers were unable to make the Bulldogs pay for it as kicker Garrett Mattix saw his field goal attempt bounce off the left up-right from 46-yards away at 12:36 mark in the second quarter.

On the second UWA position of the quarter, Ikner had a second punt deflected this time by Nathan Jernigan and the Bulldogs gained possession on the UWA 45.

Cumberland took advantage scoring on a Justin Snyder pass to Trevon Jones on a 5-yard route. The try for two points was no good, but the Bulldogs took an 8-7 lead with 7:50 to go before half.

Both defenses stood tall in the first half, barely allowing either offense to gain momentum. West Alabama finished with just 159 yards before the break and Cumberland tallied 74 offensive yards.

“We were playing sloppy as an offense,” said Head Coach Brett Gilliland. “We came out in the second half and the guys decided we were going to play. It was a whole team effort. Everybody picked up their game in the second half.”

Cumberland opened the second half with a 53-yard drive, but it was ended when Jared Washington blocked the field goal attempt and Duke Leland retuned it to the UWA 48-yard line. The Tigers took advantage of the field position scoring six plays later on a 26-yard run by Tyler Rogers to give West Alabama a 14-8 lead with 8:30 remaining in the quarter.

On the next drive, Dezmond Huntley did all the statistical work scoring after two plays on a perfectly executed option keeper up the middle for a 38-yard touchdown. This extended the Tigers lead to 21-8 with 2:32 to go in the third quarter.

“It was a feeling I can’t explain. The offensive line did what they had to do,” said Huntley about the play.

West Alabama scored on their third consecutive drive when Huntley found Ty Hill on a quick shuffle pass the running back 68-yards down the right sideline. The extra point attempt was botched on the snap, but the Tigers extended to a 27-8 advantage.

“Dez provided a great spark for us,” said Gilliland. “It’s not like Trent was playing bad. He was just a little banged up and we couldn’t get to some of the things in the run game we needed to.”

Huntley would lead the Tigers down the field for the fourth consecutive time with 5:07 remaining in the game, connecting with Randy Satterfield for a 25-yard touchdown. The Mattix extra point gave the UWA the final 34-8 lead.

West Alabama finished with 401 yards of total offense. Huntley did his part completing all four of his pass attempts for 100 yards and two touchdowns and also leading the team with 10 carries 88 yards and a touchdown.

“I got a call up from the coach and had to do what I had to do. Great team effort,” said Huntley. “I just want to thank Coach G(illiland) for giving me the opportunity.”

Ty Hill led the receiving group in receptions and yardage with five catches for 96 and a touchdown, but Randy Satterfield had the most touchdowns with two of his three catches going for touchdowns.

Cumberland totaled 173 yards of total offense. Justin Snyder is the lone statistical standout, completing 14 of 28 passes for 139 yards and a touchdown.

West Alabama will hit the road for the remainder of September. The first stop will be a trip to the Birmingham area to take on the Miles College Golden Bears. Kickoff for that game is scheduled for 4 p.m.