Demopolis dominant in shutout of Jemison 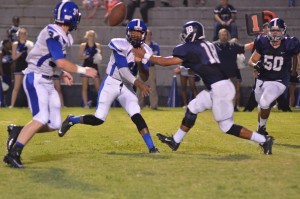 Demopolis quarterback Jamarcus Ezell pitches the ball to Andrew Jones (No. 34) before he is hit by Jemison defender Roberto Abarca (18) on a play that resulted in a 14-yard touchdown (Photo by Stephen Dawkins).

The Demopolis Tigers (3-0, 2-0) traveled to Jemison and they must have felt right at home defeating the Panthers (0-3, 0-2) 70-0 in 5A Region 4 action.
Demopolis wasted no time getting on the board scoring on their third offensive play of the game when Ezell connected with Logan McVay for a 65-yard touchdown with 9:24 on the clock. R.J. Cox connected on the extra point to give the Tigers a 7-0 lead.
On the very next possession, the DHS running backs got their engines started as Jayjerein Craig collected 56 yards to setup Drew Jones for a 13-yard score with 5:39 remaining in the first quarter. Cox would again connect on the PAT to give the Tigers a 14-0 lead.
With just around two minutes remaining in the first quarter, Marcus Wright got his paws on a punt attempt by Jemison and the recovery set the Tigers in great position on the Jemison 11-yard line.
Craig took all 11-yards for a touchdown and another Cox extra point gave Demopolis a 21-0 advantage with 3:29 remaining in the opening quarter.
The offensive barrage continued in the first quarter when McVay took his first carry of the night 58-yards for a touchdown with 1:10 to play in the first quarter. Cox connected with another extra point to extend the Tiger lead to 28-0.
The Tigers continued their offensive output for the fifth consecutive possession when Keishaun Scott took a hand-off up the middle, danced along the sideline and finish with a 60-yard touchdown with 10:15 on the clock in the second quarter. Cox connected on his PAT attempt to extend DHS to a 35-0 lead.
The push continued after an interception by Russ Logan setup the Demopolis offense on the Jemison 21-yard line and for the sixth consecutive possession DHS found the end zone when Jamarcus Ezell scrambled on a broken play for a 19-yard touchdown run with 7:27 on the clock. Cox hit another PAT to give the Tigers a 42-0 lead.
With 3:26 remaining in the first half, William Wilkins hit pay dirt on a 16-yard touchdown run and combined with a Cox extra point Demopolis took a 49-0 lead.
In the first half, the Tigers rolled to 378 yards of total offense with 305 on those yards coming from the rushing game. Leading rusher Craig finished his night with 63 yards and a touchdown on three carries.
A.J. Besteder got the bulk of the carries to start the third quarter and took his sixth carry of the stanza for a 1-yard touchdown with 7:14 on the clock. Cox added the extra point to push Demopolis further to a 56-0 lead.
With around six and a half minutes remaining in the third quarter, Travion Brown recovered a fumble by quarterback Phillip Lenoir. Besteder would take advantage the very next play on 5-yard touchdown run coupled with a Cox kick to give the Tigers a 63-0 advantage with 6:11 on the clock.
Demopolis got on the board once again in the fourth quarter with 9:40 remaining when Besteder shook loose for a 90-yard touchdown run to extend the lead to 70-0 after a successful PAT from Cox.
Demopolis finished with 583 yards of total offense in the contest. Besteder led the rushing effort with 164 yards and three touchdowns on 12 carries in a relief role for the Tigers.
The #6 ranked DHS Tigers return to Tiger Stadium in Demopolis next week to take on the Helena Huskies (3-0, 2-0) in matchup of undefeated region opponents.