Sweet Water out gains Mobile Christian but falls on the road 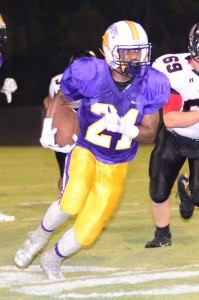 Eric Jenkins rushes for over 200 yards and two touchdowns in a losing effort.

The Sweet Water Bulldogs (1-2, 1-1) got behind early and could never quite recover, falling in a tough 2A Region 1 battle 50-34 to the Mobile Christian Leopards (3-0, 2-0).
Sweet Water won on the stat sheet, outgaining the Leopards 447 yards to 380 yards on offense, but Mobile Christian made the big plays when they mattered most.
Mobile Christian got on the board early scoring with 11:19 in the first quarter when Jordan Aubrey connected with Garren Wasden for a 19-yard touchdown to give the Leopards a 7-0 lead after a Beau Horn extra point.
Jaylin Johnson responded with a 27-yard touchdown with 8:50 on the clock. Jonah Smith would pull Sweet Water even after his extra point at 7-7.
Aubrey tossed another touchdown pass, this time to Derrick Simpson for a 57-yard score. Horn would add his second extra point of the night to give Mobile Christian a 14-7 lead.
With 10:20 remaining in the second quarter, Troy Young broke loose for a 69-yard run and coupled with a Horn PAT took a 21-7 lead.
Sweet Water found the end zone again with 1:43 before the half when Eric Jenkins pounded his way 36-yards for a touchdown. Smith connected on his extra point attempt to cut the Mobile Christian lead to 21-14.
Horn scored the only non-touchdown scoring possession with a 40-yard field goal in the third quarter with 7:51 on the clock to extend the Leopard lead to 24-14.
It took the majority of the quarter, but with 1:22 remaining Jenkins found pay dirt for the second time in the game on a 3-yard run. The PAT by Smith was good to once again close the gap to a 24-21 Leopard advantage.
However, with just 16 seconds in the third quarter Aubrey and Wasden connected for a second time for a 16-yard touchdown. Horn’s PAT attempt was no good, but Mobile Christian pushed the lead to 30-21.
Sweet Water scored its last of the back and forth touchdowns when Branson Davis found Jonah Smith for an 18-yard score and Smith connected with the extra point attempt to bring the Bulldogs to just a 30-28 disadvantage to Mobile Christian.
The Leopards dominated the rest of the quarter on the scoreboard, first scoring on the ensuing kickoff after the Bulldog touchdown courtesy of an 85-yard return by Devin Curry. The two-point conversion try was no good, but the Leopards extended to a 36-28 lead.
Sampson scored a rushing touchdown from 5-yards out with 4:55 remaining and a Horn PAT pushed the lead to 43-28.
Mobile Christian would find the end zone one last time when Young broke free for his second long touchdown of the night on a 74-yard run. Horn’s PAT extended the lead to 50-28.
Davis completed a pass to Smith with 21 seconds for a 20-yard touchdown to yield the final 50-34 score.
Eric Jenkins finished with 218 yards and two touchdowns on 29 carries. Jaylin Johnson also finished north of the century mark with 117 yards and a touchdown on 19 carries.
Sweet Water gets no break in the schedule and must prepare for a Bulldog battle in Chatom against Washington County next Friday.