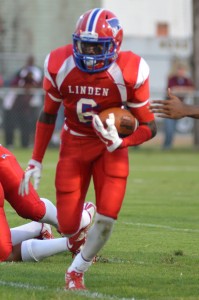 Charles Blackmon looks to find some running room against the defense.

Week four is in the books and week five is sizzling with fantastic matchups this week for local teams on the gridiron.
After nothing short of a dominant performance, the Demopolis Tigers return home to face an undefeated Helena squad in a battle for 5A Region 4 superiority.
But before that, a special Thursday night affair in Linden will see the Marengo Academy Longhorns fresh off a bye week to battle the South Choctaw Academy Rebels who are playing on a short week.
The lights at Linden Athletic Field won’t be off long as the following night the Linden Patriots host the Maplesville Red Devils in a matchup of the top two ranked teams in 1A football.
Meanwhile, the Marengo Panthers leave the friendly confines of Panther Stadium for the first time in two weeks and travel to Millry to face the Wildcats where a win for Marengo would avenge its only 1A Region 1 loss from last season for the Panthers.
Finally, a bulldog battle will breakout in Chatom when Sweet Water hits the pavement for the second week in a row to face perennial 2A Region 1 power Washington County.

Demopolis returns home for key region matchup
The Tigers (3-0, 2-0) return home after their second road shutout of the season at Jemison to host the Helena Huskies (3-0, 2-0) in a battle of 5A Region 4 undefeated teams.
DHS is averaging over 46 points per game with the majority of the offense being generated through a dominant rushing attack.
While the level of competition hasn’t been so high for the visiting Huskies, Helena has beaten every opponent on the schedule so far this season.
It will be interesting to see if the second year program can rise to the occasion and slow the rushing attack of Demopolis on the road.
Look for quarterback Riley Davis and his brother at wide receiver Austin Davis and receiver Phildon Dublin as primary threats for the Tigers to slow down in Tiger Stadium Friday night.

Tutt back as head coach for Marengo Academy
The Longhorns (1-1, 1-0 AA-R1) have had two weeks to prepare and will need all of those two weeks to prepare for a tough South Choctaw Academy Rebels (3-0, 2-0 A-R1) squad.
Webb Tutt has been re-installed as the head coach for the Longhorns as headmaster and coach David Barham is no longer with the school. Tutt said to expect the Rebels to run a ton of zone read from either the spread or from under center.
The South Choctaw offense will be spearheaded by quarterback Sterling Wells and running back Whit Wilkins who look to beat the Longhorns for the very first time.
It will be a tough go of it for the Rebels though as they play with one less day of rest coming from a grueling 40-38 victory over Jackson Academy.
The key for the Marengo Academy defense will be to play physical football up front and rise to the occasion of the moment.
In the all-time series matchup, the Longhorns hold a 19-3-1 advantage with SCA’s last victory coming in 2010.

Patriots host defending state champs
Last week, Jackson hosted a battle of the top two teams in 5A with the second ranked Aggies scoring the upset of the top ranked Aggies.
For the second week in the row, a second ranked team hosts the top team on a long winning streak when the Maplesville Red Devils (3-0, 1-0) travel to Linden (2-0, 1-0).
Head Coach Andro Williams expects the Red Devils to come in and play great defense and be explosive on offense.
Maplesville is currently riding a 27-game regular season winning streak and an 18-game overall streak. The Red Devils’ last loss came in the 2013 1A State Championship Game against Pickens County.
The key to this matchup for the Patriots is to be as physical and even more than Maplesville, but Linden will certainly have its hands filled.
Quarterback Cole Spencer and running back Terence Dunlap will be key players for Maplesville that the Patriots will have to key on to slow down the Red Devil offense.
This region battle will most likely decide the 1A Region 4 champion.

Playoff implications face Marengo
What a difference a year makes the Marengo County Panthers. This time last year, the senior laden MHS squad was 1-2 and facing a loss at against Millry that would serve as both the final home loss and the final region loss for the Panthers.
This year Marengo (2-1, 2-0) will travel to Millry (2-1, 1-0) in an early season matchup with big time implications in 1A Region 1.
A win against Millry will almost assuredly mean that Marengo fans should start making plans for Friday, November 6, to see the Panthers play whether it be at home or on the road.
The Wildcats will not be easy opponents as Millry has averaged 37.7 points per game and 49.5 ppg. against 2A opponents.
The task for the Panthers will be to slow down the high-powered Wildcats offense while on the road.
Marengo and Millry have met on the gridiron 28 times. Each team has 14 victories. Friday’s game serves as an opportunity to establish some bragging rights in what has become in interesting regional rivalry.

Sweet Water hopes to keep region title hopes alive
After falling in a difficult loss to Mobile Christian, the Sweet Water Bulldogs (1-2, 1-1 2A Region 1) look to right the ship but will have to do so in the toughest of circumstances facing the Washington County Bulldogs (2-1, 2-0 2A-R1) in Chatom.
The goal here for Sweet Water is to force Washington County into being one-dimensional by taking away the run and forcing the pass.
Running backs Keyshaun Abston and Dheir Kinsey along with quarterback Kevin Howard are straws that stir the offensive drink for Washington County.
Sweet Water wants to put that last week behind them where the team let Mobile Christian get too many explosive plays. Head Coach Pat Thompson noted that the Bulldogs are working to improve and not let that happen this year.
When asked about the fairness of having two tough opponents this caliber in consecutive road games, Thompson made no excuses saying that “it’s part of the game” and it’s up to the team to load up, focus and come away with the victory.
Washington County leads the all-time series 11-3 with Sweet Water’s last victory coming in the regular season in 2013 in a 35-32 tussle.

College Football Quick Hits
The Alabama Crimson Tide (2-0) open conference play against possibly the most physical defense in the SEC when they host the Ole Miss Rebels (2-0).
Derrick Henry continues to pace the offense in production with 243 and six touchdowns on 31 carries on the young season.
Whether one wants to chalk it up to level of competition or defensive dominance, the Rebel defense has only given up 24 points on the season.
Ole Miss beat Alabama last year 23-17 in Oxford and the Tide is looking for revenge.
The Crimson Tide is 47-9-2 all-time against the Rebels.

The Auburn Tigers (2-0) may have had what many consider the worst loss in college football last weekend. Whether it’s far or not, the Tigers have taken a tumble in the polls and are in danger of tumbling further after a road contest against the LSU Tigers (1-0)
Jeremy Johnson has to right the ship as quarterback for Auburn. He has thrown five interceptions so far and that doesn’t lend itself to the level of efficiency Auburn needs.
However, running back Peyton Barber has done well enough to earn the starting role against LSU.
The Bayou Bengals lead the all-time series matchup 27-21-1.

The West Alabama Tigers (2-0) still have questions at the quarterback position. Trent Thompson started the first game against Stillman College and performed well enough to earn a second start. However, an injury sustained against Stillman limited Thompson’s mobility against Cumberland. Dezmond Huntley entered and the Tigers scored 24 second half points in a 34-8 victory.
The Tigers will have another opportunity to solve this issue, but this time in a road contest against Miles College (0-2). The Golden Bears will be playing their third consecutive Gulf South Conference opponent suffering losses to North Alabama and West Georgia.
UWA leads the all-time series 9-1 over Miles claiming victory 41-7 in 2012 in a first round NCAA Division II playoff matchup in Livingston.