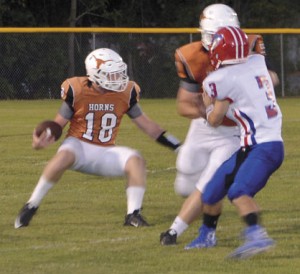 Marengo Academy’s Hayden Huckabee looks to avoid the South Choctaw Academy defense Thursday night. Huckabee was among the many bright spots for the Longhorns, rushing for 125 yards in the victory.

The Marengo Academy Longhorns made quick work of South Choctaw Academy Thursday night, 41-6.
Pushing the ball downfield, seemingly at ease, especially early in the game, the Longhorns amassed a 27-0 lead by the end of the first quarter.
The MA defense was very stingy to the Rebels, holding them to negative yardage until late in the game when only a few big plays put South Choctaw on the positive side.
The game marked the first of the season for Head Coach Webb Tutt who took over after a change during the team’s bye last week.
“Our guys played really well; I’m very proud,” Tutt said. “With everything that’s been going on, they responded well and they continue to make progress.”
Even before amassing its sizeable lead, the Longhorns was content to run the ball, attempting no passes in the game.
“That wasn’t our game plan. It just worked out that way and then we had the big lead. We have only one returning starter on the offensive line, but they’ve done a great job, not just in this game, but throughout the games we’ve played so far,” Tutt said.
The solid blocking helped Hayden Huckabee pick up 125 yards on the ground and gave MA a total of 302 rushing yards on 40 carries.
Defensively, Andrew Martin helped build the Longhorns’ big lead by returning two interceptions for touchdowns, one 20 yards and the other 58 yards.
On their first possession, the Longhorns rushing attack of Huckabee and Weldon Aydelott, along with quarterback Robert Tutt, gained chunks of yardage each carry until Aydelott drove it in from the 1-yard line. Austin Day’s point-after was good.
On SCA’s very first play of the next possession saw Martin pick off the pass and return it for the touchdown. The PAT sailed left, making the score 13-0.
After a Rebel punt, the Longhorns once again extended its lead when Huckabee hit a big hole and sprinted 62 yards for a touchdown. Day’s PAT lifted MA’s lead to 20-0.
SCA’s next drive ended badly as Martin picked off his second pass and this time returned it 58 yards for the scoring, lifting MA to a 27-0 lead.
In its first possession of the second quarter, MA capped off a 54-yard drive with a 5-yard touchdown run by Zac Murphy. MA would take that 34-0 lead into halftime.
With a running clock in the second half, MA scored again on its first possession when Huckabee hit a hole on the first play for a 45-yard touchdown run, giving the Longhorns a 41-0 lead.
Getting some younger players some playing time, South Choctaw got on the board with a solid drive that ended with a 15-yard run.
“It was a good game for us. We had no turnovers, two penalties. It was fun. Of course, anytime you win it’s going to be fun,” Tutt said.