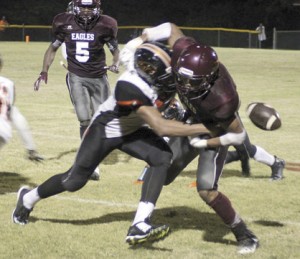 Hard hits, big plays and a close score … all the things one would expect from an in-county rivalry game held true when the Marengo Panthers traveled to A.L. Johnson Friday night. It took two overtimes for the Panthers to secure the victory, spoiling the Eagles’ homecoming, 40-38.
Both teams seemed to respond when they needed to make a big play. A.L. Johnson scored the game-tying touchdown with only 30 seconds to go. Then, in the second overtime period, the Marengo defense stood strong on a 2-point conversion attempt to end the game.
Marengo got the game going, taking possession after the kickoff at their own 35-yard line. Cordarius Pritchett carried the brunt of the load, starting the drive with a 19-yard run and a big 24-yarder later in the drive. Alphonzo Lewis add 22 total yards on the drive. Pritchett took the ball into the endzone from the half-yard line. The 2-point conversion was no good.
A.L. Johnson answered quickly with Desmond Mair breaking loose with a 33-yard run to tie the game at 6-6. The Eagles also failed on their 2-point attempt.
The Eagles would take its only lead of the game at the beginning of the second quarter as quarterback Edward London hit Michael Mason on a 19-yard pass and a few plays latter connected with Mair for another 19-yarder into the endzone. The 2-pointer failed, but the Eagles were ahead 12-6.
This time, the Panthers answered. Mair, who had a great night for the Panthers, capped off a long drive with a 26-yard run. Once again, the 2-point conversion failed as the score was tied, 12-12.