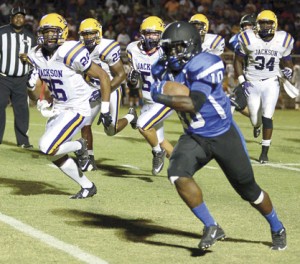 Keishaun Scott finds some room on the edge against the Jackson defense on the way for a touchdown. Scott had the only DHS offensive score in the first half.

Five turnovers helped to create a deficit and the Demopolis Tigers were never able to recover falling to the top-ranked Jackson Aggies 35-20 in Tiger Stadium Friday Night.
DHS (4-1) suffers its first loss of the season while Jackson (5-0) continues the quest for a perfect season.
“Self Inflicted,” said Coach Stacy Luker. “They had a little something to do with it. You can’t turn the ball over five times and expect to beat a good football team. We didn’t give ourselves a chance.”
Ironically, it was a turnover that led to the first score of the night when Marcus Wright pick off Demarcus Williams and tight roped the sideline for a 40-yard touchdown with 9:12 on the clock. R.J. Cox added an extra point to give DHS a 7-0 lead.
The Aggies responded with a short yardage touchdown by Michael Phillips and coupled with a Miller HcHargue extra point evened the score with 58 seconds remaining in the opening quarter.