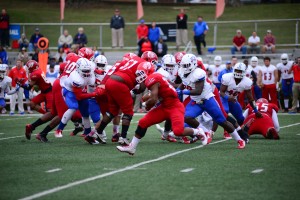 Tyler Rogers tries to find some space against the tough West Georgia defense. The Tigers finished with only 61 yards on the ground.

Early mistakes proved costly for the University of West Alabama Tigers and they weren’t able to overcome and early deficit, falling to the University of West Georgia Wolves 32-12 in Livingston.
The Tigers (4-1, 0-1 Gulf South) suffer their first loss of the season and Will Hall collects a victory in his first trip to Tigers Stadium as head coach of the Wolves (5-0, 1-0 GSC).
“Credit to them, we played a good football team,” said head coach Brett Gilliland. “We made mistakes that cost when you play a good team.”
UWA started with possession, but were only able to take it six yards before Jordan Inker was called to punt.
That would not be the case for West Georgia as LeMarcus Franks capped a four-play, 68-yard drive with a 7-yard touchdown. Will Garrett converted a two-point conversion to give the Wolves a 32-0 lead.
Hunter Heck saw a 20-yard field goal go through the uprights to push the West Georgia lead to 11-0 with 4:59 on the clock in the first quarter.
On his first drive of the game, Dezmond Huntley fumbled on a bad read-option exchange, which allowed for D.J. Ezell to scoop up the ball and take it 22 yards for a West Georgia touchdown. Heck’s successful PAT extended the Wolves lead to 18-0 with 12:12 in the second quarter.
With 7:52 in the first half remaining, UWA started a drive with a bad snap that resulted in a 20-yard loss. The drive ended with a punt that was returned for an 80-yard touchdown by Telvin Brown of the Wolves. Another Heck extra point would extend the West Georgia lead to 25-0.
Brown wouldn’t be done in the quarter as on the very next drive he caught a 32-yard pass from Dallas Dickey in the back corner of the end zone for touchdown and with a Heck PAT, the Wolves held a 35-0 lead.
West Georgia finished with 211 yards of total offense in the first half compared to just 34 yards for the Tigers.
“We had every chance to fold and didn’t and came out and played good defense in the second half,” said Gilliland. “That’s when you find out what you’re made of as a team.”
Both offenses fell silent in the third quarter, but that would all change when Harry Satterwhite entered at quarterback for UWA.
In his first drive, Satterwhite led the Tigers on a 12 play, 89-yard scoring drive capped by a 10-yard pass to Nicarius Peterson and with a Garrett Mattix PAT, the Tigers were on the board with 7:34 remaining in the game.
With just 38 seconds remaining, Satterwhite found Sweet Water alumnus Ty Morgan for an 8-yard touchdown, Morgan’s first of the season, to cap the scoring after a Mattix PAT at 32-14.
Satterwhite finished 11 of 24 for 144 yards and two touchdowns with all of his numbers coming in the fourth quarter.
“I hadn’t played in a heated game like that in a while. It felt good getting out there playing some football,” said Satterwhite.
The young quarterback also recognized the efforts of his receivers, “Nico (Peterson) made a great catch on that post and Ty (Morgan) made another great catch. Those are really their points too.”
The UWA offense finished with 219 yards on 68 plays most of which came in the second half.
The Tigers have a week to prepare for a road trip to Melbourne, Fla. for a matchup against the Florida Tech Panthers. Kick-off is scheduled for 6 p.m. and well be available to listen to on ESPN 104.9 and espn1049.com. 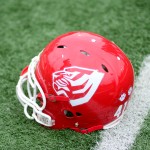