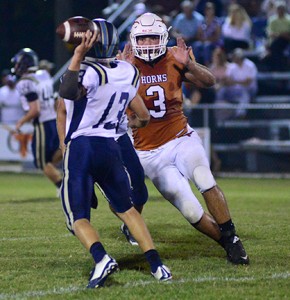 Cason Cook closes in on the Russell Christian passer.

Marengo Academy Longhorns scored early and frequently against Russell Christian Academy Warriors. The Longhorns held the Warriors to just 6 points during the key AISA Region 2 matchup.
The Longhorns improve to (5-1, 3-0) after their homecoming match-up against the Warriors (1-7, 0-3).
The Longhorns opened up after half with a 46-0 lead. The Longhorns did not score a second half point.
The Warriors scored a late fourth quarter touchdown to bring the score to 46-6.
The Longhorns were strong on defense as senior Cason Cook proved difficult to block as he continually rushed the Warriors quarterback and ended the night with 6 tackles.
The Longhorns offense showed no mercy as they rushed for 3 touchdowns. Senior Andrew Martin led the team with 2 rushing touchdowns during the game.
“We just need to continually improve each game,” Marengo Academy coach Webb Tutt said. “We have to work on our team and make sure we do the best we can each time we are on the field.”