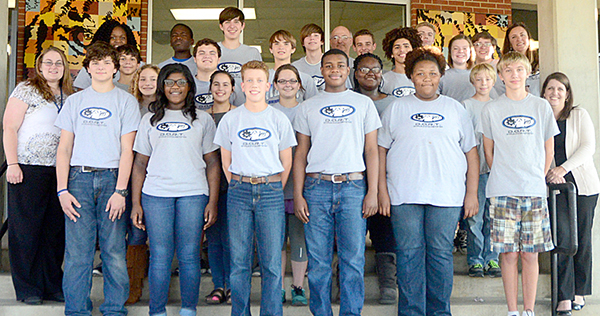 Grade school can be tough. Students sometimes struggle to find an identity and find a niche. Some never find something in which he or she can excel, bouncing from club to club and social group to social group.
However, there is one group of young students in the Demopolis City Schools who don’t have this struggle. Since 2013, the Demopolis Advanced Robotics Team (DART) has seen a group of students come together in the name of education and fun to create a family atmosphere that is also competitive at the state level.
The group is currently comprised of seventh through tenth graders who have been with the program since its inception.
This week, the group is gathering all of its marketing material and brainstorming a presentation for competition on Oct. 30 and 31 at 2015 Boosting Engineering, Science & Technology (BEST) Shelton State Community College in Tuscaloosa.
Marketing is just a part of its as DART must also build a robot with materials provided by BEST to build the robot.
“It’s extremely stressful, especially for the marketing team,” said team DART. member Tate Sparkman.” I have to talk to the people who build the robot. They don’t necessarily want me in here. They want it quiet and no distractions and I have to come in and ask them questions on every aspect and individual thing.
Sparkman continued, “They get mad and me and I get mad at them. At the end of the day, it’s worth it.”
The year’s game is mining and we have to go underground, figuratively, to pick up minerals. Mines are unfit for humans. Robots should be designed to pick up minerals to bring to surface. The option to repair pipes and air filters is available to the team. The main goal is to pick up anything of value to bring back to the correct bins in the starting area. The team has to be aware of how many minerals other teams are collecting while they are working, because colleting too many can cause the team to lose points. Watching market value is key and at the end of each round that value is tallied and the team with the most points moves to the next round.
“We’re putting a new foot forward,” said DART. photographer Patrick Hall. “We have always been good, we’ve made noise in the state of Alabama, the only three years we’ve ever done it. We’re a good team, a very organized team and we’re going to do very well.”
Hall, a ninth grader, has been part of the program since it’s inception and is pleased with this team and what it means to him.
“I would say this year we are off to our best start,” Hall said. “It’s definitely always been an enjoyment of mine, more than a hobby. It’s a career path. A life choice.”
Ashley Brock, who started the team as the first sponsor, is thrilled with how the team is progressing in year three.
“If you look at the ones who’ve been in it the whole three years, they’ve gained self confidence, leadership skills and they’ll come in tell the younger ones what to do and how to do it,” said Brock.
The students have mentor volunteers who come in and volunteer with the program, but the students have major control in what happens with the marketing and robot.
“I think it’s the ownership that they have with it. I’ve completely turned it over to them,” said Brock. “They make the decisions. They come up with the game strategy and robot design. The mentors just help facilitate and guided in the right direction.”
DART has finished second place at its only two BEST competitions and finished thirteenth in regional competition at Auburn University.
The group is excited and looking forward to the journey to winning the BEST completion and competing at regionals, but most importantly they are ready to do it as a team and family.