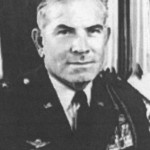 John Walter Collins III, 94, a retired Army Brigadier General, died Sunday, Nov. 22, 2015 in San Antonio, Texas. General Jack Collins was born in Demopolis on August 16, 1921.
His formative years were spent in Gallion, where his father, John Walter Collins Jr. , ran the general store and raised cotton, and his mother, Garnette Lyons Collins, was postmistress. He graduated from Demopolis High School, attending Marion Military Institute for one year prior to his appointment to the United States Military Academy, West Point, New York. At West Point he participated in baseball and football, and was commissioned as a 2nd Lieutenant in the Infantry upon graduation in June 1943. His 30 years of military service as an Infantry and Airborne officer included combat duty in Europe, Korea and Vietnam.
During WWII, he was taken prisoner by the Germans in the Battle of the Bulge and was a POW until a task force from Patton’s Army arrived to liberate the camp. While assigned in Manchuria, he became a prisoner of the Chinese Communist. In his troop duty assignments, he had the good fortune to command every size unit from Rifle Platoon to Assistant Division Commander.
His numerous decorations include the Distinguished Service Medal, Distinguished Flying Cross, Legion of Merits, Silver Stars, Bronze Stars, Purple Heart, the Combat Infantryman’s Badge with Stars, Parachute Badge, and Air Medals. He was also inducted into the Alabama Military Hall of Honor in 2009. This was one of the great surprises and honors of his life.
After retirement in 1973, he worked for the Greater Miami Bicentennial Organization. In 1977 he joined his old friend, Dr. Meredith Mallory Jr., in San Antonio. They worked together for many years in the oil and gas business.
He was married to Virginia Mowry and Jean Jerome.
General Collins treasured his lifelong bond with his family and friends in Demopolis. His high regard for the Turner family and for his Collins cousins were mainstays the last years of his life. A consummate storyteller, a natural leader, a loyal friend, a generous patriarch, his candor was legend, and his capacity for good times and good company prevailed to the end.
He is survived by his daughters Beverly Collins of Ashland, Oregon and Judy Jones of Birmingham,
Alabama. Also by 5 grandchildren and 3 great-grandchildren.
General Collins will be buried at St. Andrew’s Cemetery in Gallion, Alabama with graveside services on Saturday, Jan. 16, 2016 at 2 p.m.