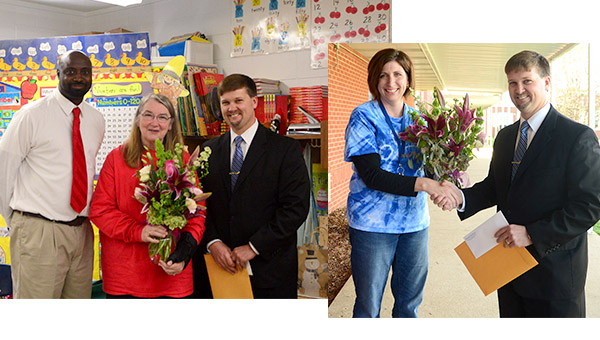 Ask any teacher and he or she will tell anyone that one does not enter the teaching profession for the special recognition and definitely not for the financial gain.
However, special recognition for efforts made in the field are a nice reward to compensate the grind and dedication to the craft.
Patsy Cullum and Meggin Mayben were given such attention and honor being named the elementary and secondary Demopolis City Schools Teachers of the Year, respectively on Dec. 17.
“It’s a difficult process, because they are all so very good,” said DCS Superintendent Kyle Kallhoff.
Patsy Collum received the elementary education honor.
She is a first grade teacher at Westside Elementary School.
Cullum holds 40 years of experience and was hired by DCS in 1975. She feels her greatest educational accomplishments are the sparks Cullum has helped plant in the minds of her students that lead to happy, successful lives.
Meggin Mayben, history, art and broadcasting teacher at Demopolis Middle School, is the secondary education nominee.
Mayben was hired by DCS in 2005 and has 11 years of teaching experience.
She believes all students are creative and have something wonderful to contribute to this world. She wants students to be inspired, create for themselves, to think for themselves, and most importantly be themselves.
Cullum and Mayben were selected by an independent committee according to Kallhoff.
Any personal information from teacher of the year applications that might give any inclination to identity was erased to the best ability of Kallhoff.
The other two finalist for recognition were Kristi Stokes, third grade teacher at U.S. Jones Elementary School, and Joseph Browder, Jr., U.S. History teacher at Demopolis High School.
“All of them are great applicants,” said Kallhoff. “All of them do great, fantastic jobs at their school.”
All four finalist were presented with a “Golden Apple Award” representative of their statuses as the best at each school during the Dec. 14 DCS Board of Education meeting.
The applications from both of the winners have been submitted for regional judging.
From there, if either Collum or Mayben are selected to represent this eighth of the state, the applications will be put up for state judging and from there to the national level.
Educators have to do what they do for the love of the students and the craft.
The profession comes with the sacrifice of time with family, friends and even personal time.
However, the rewards of such giving can lead to great things for students and the community.
Cullum and Mayben are reaping the rewards of that great personal sacrifice.