Arrest made in connection with Bell Grayson Hit and Run 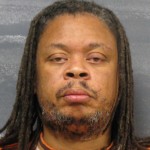 The Demopolis Police Department has made an arrest on a previously unclosed case.
Herman Gilmore, Jr. was arrested on Dec. 31 in connection with a hit and run that claimed the life of William Christopher Reid on Nov. 29. Gilmore, 44, is a resident of Eutaw, Alabama.
DPD Chief Reese said, “It was unusual to have a Hit & Run in Demopolis but two back to back, was very unusual.”
The DPD has the vehicle involved in the crime and Reese credits his DPD Investigations Division for keeping a sharp eye and never giving up on the crime.
“This arrest wouldn’t bring William back, but may some bring some closure to the family and the community,” said Reese.
Gilmore was officially charged with leaving the scene of an accident with injuries, tampering with physical evidence and possession of cocaine.
Reid, 24, of Demopolis was struck by a vehicle on Bell Grayson Road early morning on Nov. 29 sometime between 12:30 and 1:30 a.m., according to officials with the Demopolis Police Department. Reid was walking on Bell Grayson Road when he was hit. He was pronounced dead at the scene.
No further information was provided by the DPD.