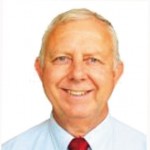 Dan England is the new chairman of the Marengo County Commission.

The Marengo County Commission has a new chairman as District 2 Commission Dan England took over the role from District 1 Commissioner Fred Armstead during the regularly scheduled meeting on the morning of Jan. 12 at the Marengo County Courthouse.
During a departmental report by Kevin McKinney, the issue of participating in the State of Alabama’s Safety Incentive Discount Program (SIDP) was brought up.
McKinney mentioned that county officials fully participated the first year and was reimbursed the complete $4,500 that Marengo County is eligible to receive.
However, last year the county only received $1,200 because of low participation and some miscommunication from the state.
For example, part of the training requires each county’s sheriff’s department to send two deputies to receive training between four different meetings. Instead of being able to send different sets of deputies, the counties are required to send the same set to all the training sessions for the year to receive credit for SIDP.
McKinney’s request to the commission is to decide whether participating in the program is worth the effort, because sending people to the state training instead of doing in-house training may not be worth the strain on the budget without full reimbursement.
Everyone in the room agreed that safety training was important and that full participation in SIDP was vital if the county is to continue in the program.
No decision was made on the future Marengo County plans for SIDP.
Also during the meeting, Commissioner England brought up the idea of integrating new technology into the meeting area.
He said it could possibly be done by adding a projector or a smart-TV and laptop in the commission chambers to display information and to be able to search for information whenever called upon. England cited that other county commissions are now using such technology for their meetings.
However, Commissioner Armstead questioned whether or not a county the size of Marengo County really needed to add that kind of technology to the courthouse and if it can be done cost-effectively.
Commissioners John Crawford Jr., Calvin Martin and Michael Thompson mentioned that they didn’t know much about a media center and adding one at the time.
England and County Administrator Meredith Hammond agreed to do more research into the cost of such of task.
Also during the meeting, the commission approved the hiring of Terry Hinton as a deputy and Cheree Hinton as chief deputy for the Marengo County Sheriff’s Department.
Randy Sanders was approved to continue as a part-time employee during elections for the county.
First Bank of Linden will host the county certificate of deposit (CD) at an 8 percent rate.