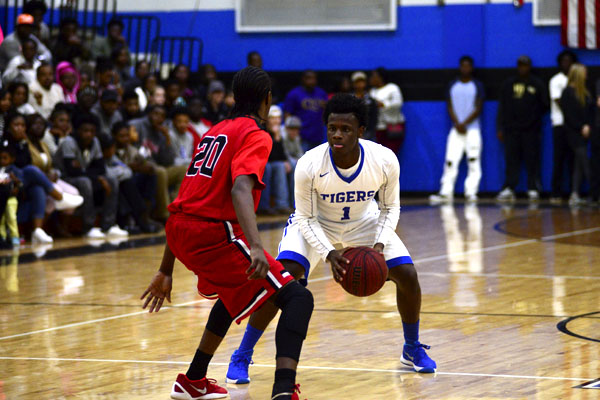 Xavier McCann weighs his options on offense against Sumter Central.

The press proved to be too much for the Tigers as Demopolis High School fell at home to the visiting Sumter Central Jaguars 61-25 in Demopolis on Jan. 13.
The loss drops the Tigers to 8-5 overall and 2-1 in 5A Area 6 play while Sumter Central improves to 15-2 and 3-0 in the area.
“The pressure panicked us out,” said Head Coach Ashley Allen. “We’re young at guard, the pressure got to us and we didn’t run the game plan at all.”
Neither team was able to get much going offensively, but SCHS did get to the free throw line an astonishing 13 times in the first quarter. However, the Jaguars weren’t able to capitalize and missed 10 shots from the line but still took a 12-6 lead.
The second quarter was all SCHS and the Jaguars stifling defense forced multiple steals to hold DHS to just one point and Sumter Central surged to 39-7 halftime lead.
The Tigers would never recover from the halftime deficit and be outscored 22-18 in the second half to bring the score to the 61-25 final.
“I have to build the morale back up. We were on a seven game winning streak coming into the night,” said Allen. “Then we’re work on building from here fundamentally.”
The Tigers return to action on Jan. 16 in Camden against Wilcox Central in Camden.
However, the Tigers also have their eyes on some redemption and a rematch against Sumter Central Jan. 22 in Livingston.
The game plan is simple for the Tigers.
Allen said. “We have to be able to break the press.”
The Tigers have just over a week to figure it out.