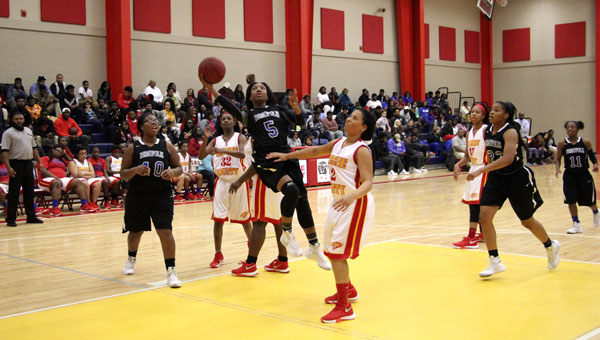 Courtney Hill tries to sink a layup under heavy pressure. Hill finished as one of the leading scorers in this contest.

A quartet of double figure scorers led the way as the Demopolis High School Lady Tigers run of perfection continued with a dominant 61-15 victory of the Greene County Lady Tigers on Jan. 19.
Ivery Moore led the all scorers with 17 points and Erica Bennett was right on her heels with 15. Courtney Hill and Sha’Deitra White both scored 12 to round out the scoring leaders for the Tigers.
With the victory, the DHS Lady Tigers are now 16-0 on the season with five more games remaining on the schedule.
“I thought they came out from the start mentally ready to go,” said Head Coach Tony Pittman. “We were able to get some easy baskets and get into the flow of the game. “
DHS used its trademark, suffocating defense to limit GCHS to just three points en route to a 16-3 opening quarter advantage.
The second quarter wasn’t much different either as the quarter went 21-6 in favor of DHS to give the Lady Tigers a 37-9 halftime advantage. However, most of those buckets for Greene County came as the half was about to end, which did not please Coach Pittman.
One thing you don’t want to do with a team rolling like this is allow them to be content,” said Pittman. “Whether we are 30 up or 30 down, we have to continue to coach.”
The DHS Lady Tigers came out with renewed effort and only allowed six points for the rest of the contest while scoring 24 second half points to finish with the 61-15 final score.
DHS will conclude 5A Area 6 play this week with games at Dallas County on Thursday night and another road contest at Sumter Central on Friday night.