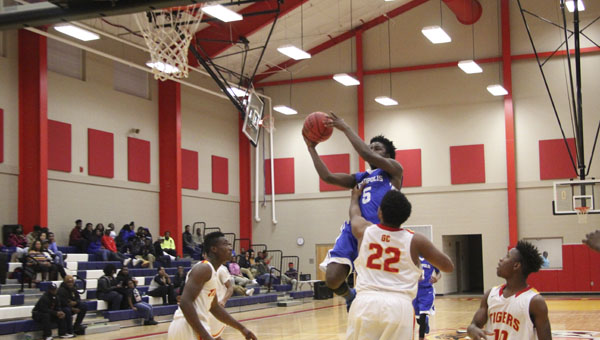 Xavier Jowers soars to the rim against Greene County. Jowers led the Tigers with 15 points.

Free throws were the key as the Demopolis High School Tigers ended a two-game slide with a 46-39 victory at Greene County High School on Jan.19.
“We needed that. We bounced back from two really tough losses,” said Head Coach Ashley Allen. “I’m proud of them. It was a tough game and we took care of business.”
The contest was competitive and close throughout with both teams scoring 12 points in the first quarter. However, DHS was able to create a little separation to take a 23-18 lead to halftime.
Greene County flipped the script in the second half, seemingly hitting every tough shot on the way to a 14-3 quarter in their favor to take a 32-26 lead to the final quarter.
Both teams would trade body blows in the quarter, but the Demopolis defense stiffened to tie the game with nearly two minutes left at 39-39
From there it would be all about the free throws for the Tigers as Josh Moore hit two from the line with 1:39 left in the game to give the Tigers a lead they would not relinquish.
Xavier Jowers hit two clutch free throws of his own with 40.2 seconds left to ice the game at 43-39 and two more shots at the line by Shakari Williams gave the Tigers the final 46-39 advantage.
Allen said, “Free throws were big. I told them we had to hit our free throws and we could not turn the ball over today.”
Jowers finished as the leading scorer for Demopolis with 15 points, while Moore finished with 13 points and Williams added 9 points.
DHS will conclude 5A Area 6 play this week with games at Dallas County on Thursday night and another road contest at Sumter Central on Friday night.
A win against Dallas County will give the Tigers outright second place and a win against Sumter Central will give them much needed and sweet revenge.