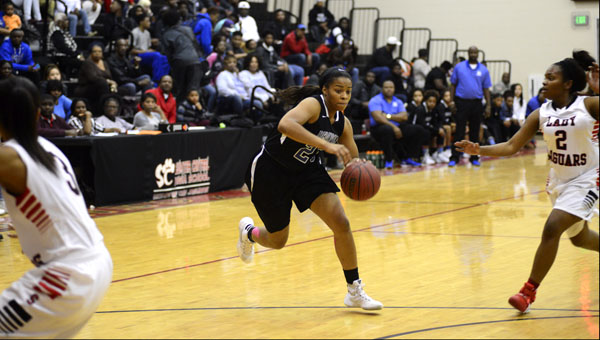 Ivery Moore finished with 11 points, but the Lady Tigers lost for the first time this season

As the clock hit all zeroes in Livingston, the reality started to set for the Demopolis High School Lady Tigers that for the first time this season they were on the wrong side of the final score and fell to the Sumter Central Lady Jaguars 57-52.
The Lady Tigers dropped to 17-1 on the season and 5-1 in 5A Area 6 play while the Lady Jaguars improved to 13-7 overall and 3-2 in the area.
The goal, yelled out by SCHS Head Coach Shani Jones, was for the Lady Jaguars to use every opportunity to push the ball down the court as quickly as possible. This would allow the team to take advantage of a lack of depth due to multiple injuries throughout the season for DHS.
The Lady Jaguars did just that by forcing the Lady Tigers to go the bench early due to foul trouble, which helped SCHS to a 15-10 lead after the first quarter.
In the second quarter, the home team kept running and built a 14-point lead midway through the quarter before the DHS used a flurry of three-pointers to close the gap to a 34-28 margin at the half.
The Lady Tigers were able to gain a measure of control in the third quarter, outscoring SCHS by six points to tie the contest heading to the final quarter.
Because of the earlier foul trouble, the Lady Tigers defense suffered and couldn’t be as aggressive. As a result, the Lady Jaguars were able to get some easy shots down the stretch to collect the 57-52 victory in front of an ecstatic home audience.
Offense was not an issue for the Lady Tigers as a quarter of players finished in double figures. Courtney Hill and Erica Bennett both finished with 13 points while Sha’ Deitra White and Ivery Moore finished with 11 points.
Treionna Hudson led SCHS and all scorers with 15 points, Kiajia Dent finished with 12 points and Miajia Dent scored eight points to round the leading scorers for the Lady Jaguars.
DHS had already clinched the top seed in 5A Area 6 and will host the area tournament starting on Feb. 8.