Lady Tigers back on track with win over Selma 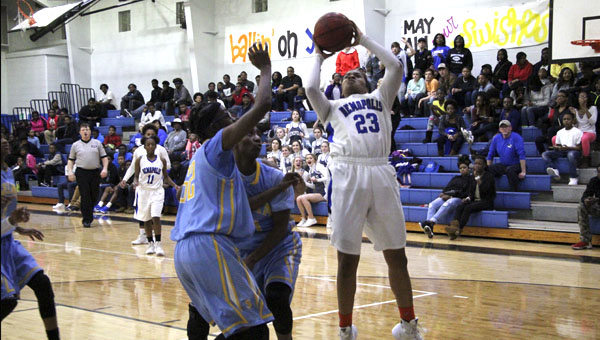 Ivery Moore didn’t lead in scoring, but had the most crucial point with in a free throw in the victory over Selma.

Fouled with just 6.8 seconds left in the game, it came down to Ivery Moore to break a tie in a thrilling contest at the free throw line. And she did just that, hitting one of two shots from the line to give the Demopolis High School Lady Tigers a 31-30 victory over the 6A Selma High School.
Demopolis now stands at 18-1 on the season while the Lady Saints have fallen to 21-4 on the season.

Moore’s missed second free throw actually helped the team strategically as the miss forced Selma to rebound the ball 4.2 seconds left and call a timeout just to have to go full court in a short amount of time.
The Lady Saints did come close to making it all the way down court, but Selma’s Areyana Williams was called for a traveling violation with 1.4 seconds on the clock. DHS then put the ball in play to seal the victory.

The game had been close throughout as the teams battled to a 16-16 halftime score and Demopolis only had a one-point lead heading to the final quarter.

Courtney Hill lead the team in scoring with 14 points, including four field goals from behind the arc.
Williams led the Lady Saints with 14 points.

The Lady Tigers return to action Friday night on the road once more against in-county foe Linden High School. Demopolis claimed a 59-36 victory in a match-up against the Lady Patriots in a Dec. 11 early season game.