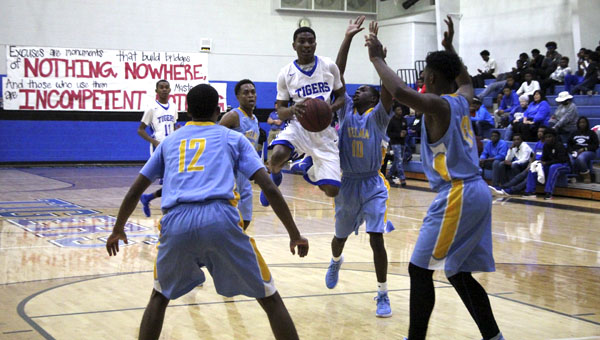 Malik Moore looked impressive guiding the offense in the second half. The freshman looks to get more integrated in the rotation as the area tournament looms.

“Today we did well. We did exactly what we were coached up to do,” said Head Coach Ashley Allen. “We needed to keep possession as much as we could and be more fundamentally sound.”

The early lead allowed the Tigers to run some seldom used players as well as younger members of the varsity team.
Recently, Allen moved Malik Moore to the varsity team and in the second half Moore handled most of the point guard duties for the Tigers with noticeable success.
“He has great poise. He’s young. I want to get him implemented in the offense real early do he can get acclimated,” said Allen. “He definitely knows what he’s doing as far as getting the tempo slowed down and the offense under control.”

Quentravious White led the Saints and all scorers with 20 points.

The Tigers could still finish as the second seed in the 5A Area 6 tournament, but it will come down to a coin flip as DHS, Dallas County and Wilcox all finished with the same record.
“Anything but number four,” joked Allen when talking about seeding.
Both teams that finish in the area finals will move on to the Central Sub-Regional Tournament.
Coach Allen mentioned that the next two weeks is about composure and working on fundamentals and controlling the ball. Allen said, “It’s just like football, the more you control the ball the more you can control the defense.”

Demopolis returns to action Friday night on the road against the Linden Patriots. The Tigers claimed
a 62-45 victory at home over the Patriots in their Dec. 11 meeting.