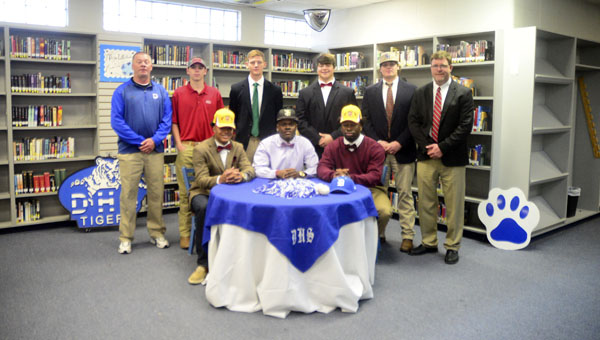 Seven DHS Tigers sign scholarships to play at the collegiate level. They are picture here with Athletic Director Stacy Luker on the far left and DHS Pricipal Christopher Tangle on the far right.

“It’s rare that schools the size of Demopolis have this many athletes to sign scholarships,” said Demopolis High School Principal Christopher Tangle to the large gathering in attendance for the National Letter of Intent Day Wednesday morning in the DHS library.

Rahmeel Cook highlights the class, signing a certificate of commitment to attend Army West Point.
At 6-2, 215 pounds, Cook is expected to spend time as a defensive end/outside (jack) linebacker hybrid.
“Once I learned a little bit more about them, they were the best fit for me,” said Cook. “I feel that I can handle it and it’ll be a good experience.”
Cook finished his senior season with 65 tackles and five sacks.

The Tuskegee Golden Tigers signed the backfield duo of quarterback Jamarcus Ezell and running back
Jay Craig. Both Craig and Ezell will have the opportunity to compete for starting jobs at Tuskegee.
Jay Craig received offers from schools such as Alabama A&M, Miles, and West Alabama (UWA).
“I had a lot of family that went to Tuskegee, talking to Coach (Willie) Slater they run the same offense we did in Demopolis, so it just felt right,” said Craig.

Jamarcus Ezell will not only join the Golden Tigers as a quarterback for the football program, but he will also play baseball for Tuskegee.
“I know that they are good in athletics. I know they have a good winning tradition. I also know Coach Slater grew up around here, so he knows football and how to win,” said Ezell.
On the baseball side, Ezell is expected to receive work at either second base or shortstop.

Jacob Rodrigues signed a scholarship to attend Huntingdon College in Montgomery.
“If I can in and learn the plays, they will work me at center or guard,” said Rodrigues. “I feel pretty accomplished. They came in late in the game and gave me an offer.
Rodrigues felt like he’d excel in football over baseball offers because of size.

Demopolis Baseball’s Luke Yelverton officially signed his letter of intent to pitch for Spring Hill College in Mobile.
“I’m blessed to be playing at the next level and lucky God has given me an opportunity to play,” said Yelverton. “I’m so excited. It’s been a dream growing up to be able to play at the next level. I have had so many people help me to get here.”
Yelverton is expected to immediately contribute to the starting rotation.
It’s worth noting that Spring Hill and Tuskegee currently both play in the Southern Intercollegiate Athletic Association, so it is possible that Ezell and Yelverton may face each other in a meaningful collegiate at-bat.

Adam Brooker signed his scholarship to play soccer at the University of Alabama-Birmingham.
While playing soccer at UAB, Brooker will shoot for a degree in Computer Science because of potential job prospects in the field.
“I’m hoping I’ll be able to start immediately,” said Brooker. “I think my game has improved greatly. I still have some things to work on as you always want to improve. Club soccer has helped a lot.”

Mark Joseph Johnson signed on for a golf scholarship at UWA in Livingston.
“I started playing golf because I enjoyed it, but then I tried harder for scholarship because I was little good at,” “Once I decided to play, I decided to go at it full time.”
Johnson understands that his most work will come from his mind as he prepares for the next level.
“You can be as good as you are, but if your not strong in the head you’ll break down on the course. You have to improve in the mental game.”

These will not be the final scholarship signers for Demopolis as several basketball standouts are expected to receive offers later in the spring semester.