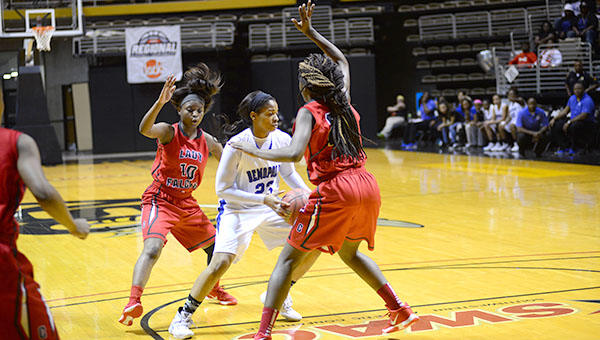 Foul trouble and tough defense never allowed Demopolis to get going. Ivery Moore did finish as the Lady Tigers scoring leader with 19 points.

Early foul trouble never allowed the Lady Tigers to get into any offensive rhythm, which aided the Central-Tuscaloosa Lady Falcons to collect a 56-47 victory over Demopolis Feb.22 at the Dunn-Oliver Acadome on the campus of Alabama State University in Montgomery in n early morning contest.

The loss in the semi-final round of the 5A Central Tournament ends the Demopolis season at 23-4.

Ivery Moore committed two early fouls in the first quarter, which sent her and her six opening quarter points to the bench. This allowed the Central-Tuscaloosa defense to focus on the perimeter shooters.

“They were shading toward the shooters and putting pressure on the point guards and it made it difficult for us to get into our offensive sets,” said Demopolis coach Tony Pittman.

It showed in the box score as the Lady Tigers, who usually take a high amount of shots behind the arc, took only two three pointers including Erica Bennett’s buzzer beater three to give the Lady Tigers a 13-12 lead after the opening quarter.

Demopolis was able to build as much as a six-point lead when Courtney Hill connected with a shot from the behind the arc Bennett scored as well to bring the score to 21-16 Demopolis and force a Central-Tuscaloosa timeout.

However, soon there after Moore was called for her third foul of the game which allowed Central Tuscaloosa to go a 10-0 throughout the remaining five minutes of the half and take a 26-21 lead to the half.

“Ivery getting in foul trouble was big because she was a big part of what we were going to try to do as far as attacking them offensively. We started out doing a great job but just picked up some cheap fouls,” Pittman said.

With Moore in foul trouble, Samantha Williams had to step in and see extended time in the post for Demopolis.
Pittman said, “Samantha came in and did well defensively, but coming in to replace a senior who has been playing for four years, that’s big. But she played great minutes though.”

Central-Tuscaloosa came out firing on all cylinders in the third quarter, outscoring the Lady Tigers 20-8 thanks in part to Antiyocka Howard who went for 10 points in the quarter including two three-pointers as the Lady Falcons took a 45-33 lead to the final quarter.

The Lady Tigers weren’t looking to go quietly and battled back fiercely in the fourth getting the lead within single digits several times, however Sha’Deitra White fouling out with 1:38 remaining and then Moore getting her final foul with 28 seconds left proved too much for Demopolis to overcome.

Moore finished with 19 points with 13 coming in the second half. Bennett finished with 10 points while Hill scored nine to round out the scoring leaders for the Tigers.

After finishing with a superb effort from the three-point line in their sub-regional contest, the Lady Tigers finished just 4-20 from behind the arc due to Central-Tuscaloosa’s commitment to slow Demopolis shooters.

Howard led the Lady Falcons and all scorers with 24 and TraNiya Pitts added 13 points to lead the squad.

The loss signaled the end of the run for the four seniors, Bennett, Hill, Moore and White, who led the Lady Tigers this season and played a pivotal role in recent success.
“They’ve been huge. Four winning seasons. Four trips to the playoffs. You can’t ask for anything better than what they’ve done,” said Pittman. “They’ve done a good job of leading this basketball team every year.”

The season maybe over, but the memories made during this run will certainly live in the minds and hearts of the players and fans.