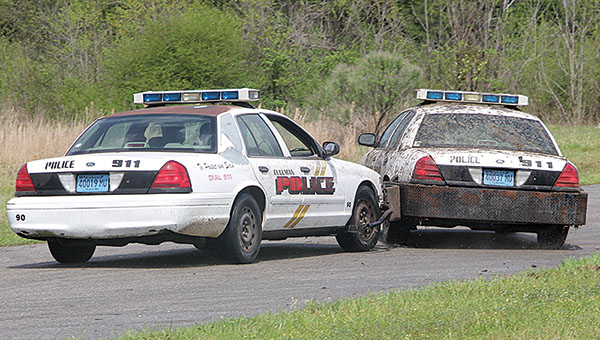 Demopolis Police Officers were trained in Precision Immobilization Technique during a three-day session held this past week. Lt. Gene Bates of the Cullman Police Department was the instructor. The technique is designed to help officers end pursuits more quickly when the circumstances allow the maneuver to be administered.

Lt. Gene Bates of the Cullman Police Department was on hand March 29-31 to train officers with the Demopolis Police Department on Precision Immobilization Technique (PIT).
After sitting through a morning lecture, officers traveled to the city airport to learn the basics of the PIT maneuvers and then to the industrial park to do a full practice as part of three-day training.
“It’s a tool that officers can have at their disposal during pursuit,” Bates said. “It’s not something they’ll be able to do in every pursuit, but it’s just another tool have to have in the box along with other things.”
The move was developed and named by the Fairfax County Police Department out of Virginia and is all about providing more options for law enforcement to use to end pursuits.
“Stinger spike strips, stop sticks are tools to have, but sometimes officers don’t have them or are not in a position to deploy them,” Bates said.
According to Bates, there are certain limitations to the pit technique such as the location of the pursuit, if other vehicles are around, presence of pedestrians, speed, and the type of vehicles.
“Open road, no ditches, no trees, no obstacles and flat is perfect. Nothing for the vehicle to hit when they do the technique,” he said.
With the practice that users of PIT undergo, officers are able to predict the trajectory of the vehicle.
“We know where it’s going to end up when we do the technique. It’s not us hitting them and them losing control and just sliding off the road,” Bates said. “I come up and do a driver’s side pit, I know the vehicle is going to rotate 180 degrees and end up on the left side of the road. The beauty about this technique is that it’s predictable.”
Lt. Bates teaches the class at least once each year.
Aside from criminal pursuits, the PIT maneuver can also be used in other scenarios.
“Once it was used in a medical situation where the driver was having a medical condition and couldn’t stop the car,” said Bates.