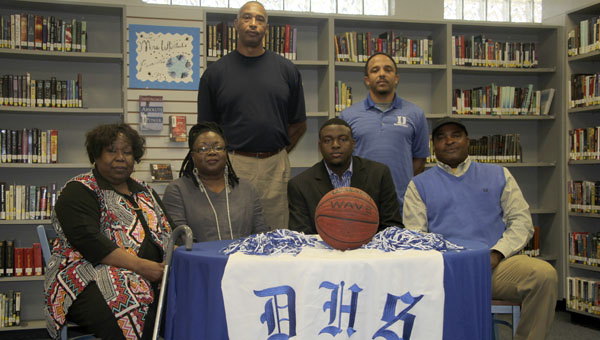 A trio of Lady Tigers and boys basketball standout all signed scholarships to take their crafts to the next level.

Ivery Moore signed a scholarship to continue her career at Shelton State.

“She’ll probably be a three-guard for us with her size, speed. That’s what we’re going to kind of develop her into,” said SSCC coach Madonna Thompson said. “She probably needs to work a little bit more on her guard skills, her perimeter shooting and her ball handling. For her to come in and to be able to leave us and play for a four-year school, she’s going to have to play a three-guard.”

Moore is following in the footsteps of her sister, Shadijah, who went on to play for Sam Houston State.

Courtney Hill and Sha’Deitra White both signed scholarships to play at Lurleen B. Wallace in Andalusia next season.

The two combined to set school records as White totaled 15 assists and Hill connected on eight shots from beyond the arc from behind the arc in a postseason victory against Beauregard.

“It speaks volumes to our seniors, their commitment to this program for three to four years,” said DHS coach Tony Pittman. “It sets the example for the young students and the kids coming up to say, ‘Hey, if I work hard, if I stay committed to the program, if I do the things that the coaches ask me to do, I too can sign scholarships my senior year.’”

The Lady Tigers finished 23-4 during the 2015-2016 season which ended in a loss in the Central Regional tournament.

Later in the day, Josh Moore signed his scholarship to play at Southern Union in Wadley, Alabama.

“First off, he’s a fine young man. I really love the way he played. I think his upside is tremendous and I just think he is going to get better and better,” SU coach Ron Radford said of Moore. “Hopefully a couple of years down the road, we can get him in a good four-year school and he can do something really positive for himself.”