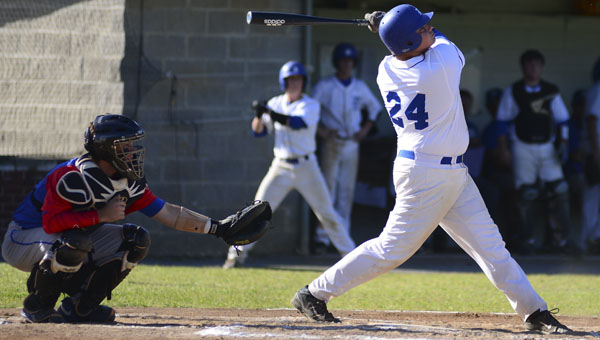 Jacob Rodrigues belted his first home run of the season of the centerfield wall during Thursday’s loss against the American Christian Academy Patriots.

After recovering from being down three runs, the Demopolis Tigers took a two run lead into the final inning; however, walks and hit batters were the difference as the American Christian Academy Patriots scored seven runs in the top of the seventh to take a 10-5 victory over the Tigers.

“We competed well for six innings, but we didn’t close,” said Demopolis coach James Moody about the late inning loss. “We preach to them every day, every pitch, every at-bat, every inning, every game, all of it. We couldn’t do that today. We couldn’t finish.”

In that inning, the Tigers scored four runs in four consecutive at bats as Wesley Allgood was hit by a pitch with the bases loaded to score Andrew Patterson. Then Luke Yelverton singled to score Jacob Rodrigues. This was followed by a Demetrious Davis single to allow Jonathon Lewis to cross the plate and then Allgood scored on an error to give DHS a 4-3 lead.

In the bottom of the sixth, Rodrigues hit his first home run of the season to extend the Tigers lead to 5-3.

However, in the top of the seventh DHS pitching would struggle to find the strike zone and allowed eight free bases runners by either a walk or a hit by pitch.
In the midst of that, Squiers crushed a grand slam over centerfield to give ACA a 7-5 lead that would extend to the 10-5 final.

“I was proud of our effort. I was. I was proud of our effort. We’re down some kids and I thought the kids stepped in and did a good job for us and put us in position to win the ball game. That’s all we can ever ask for, regardless. I’ll take a two-run lead in the seventh any time,” Moody said. “It’s a learning experience for us. If this situation arises again, I hope that we draw from it and realize that you can’t put people on base without making them earn their way.”