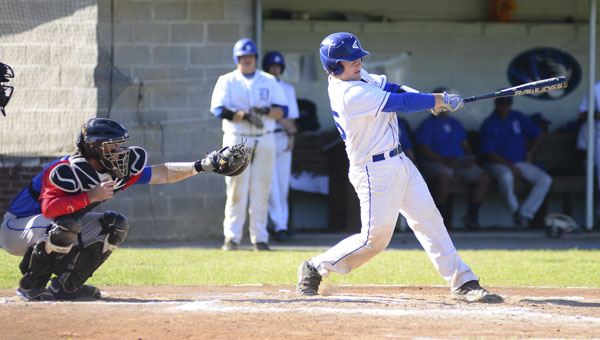 R.J. Cox finished 3 for 4 and drove in two runs on the road against Sweet Water. Cox is tied for the team lead in RBIs with 17 on the season.

Demopolis jumped on Sweet Water early scoring two runs in the top of the first on the way to a 3-0 shutout road victory over the Sweet Water Bulldogs on April 14.

Cox would later score on a passed ball during Hunter Colyar’s at bat to give the Tigers a 2-0 lead.

Then in the top of the second Barton scored once more off of a single by Cox to give DHS the final 3-0 margin needed for the road victory in the in-county rivalry contest.

Cox finished 3 for 4 with 2 RBI to lead the team. Barton also went 3 for 4 with two runs scored and two doubles.

The Tigers now await to find out who they will face in the first round of the state playoffs on Friday, April 22 at DHS.