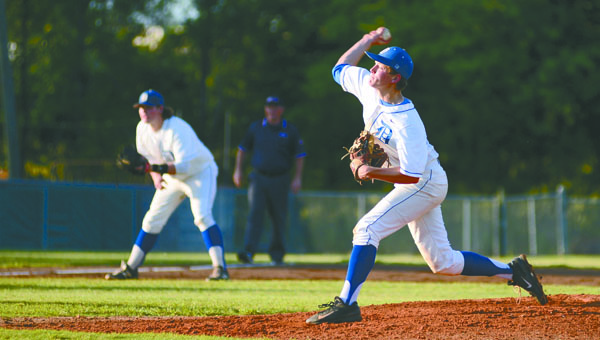 Hunter Colyar took a no-hitter into the top of the sixth in the first game before giving up two doubles in the inning in the game one win. Pictured here playing third base, Luke Yelverton got his turn in the second game of the doubleheader and only gave up one hit in the bottom of the fourth to Alabama Christian Academy to secure the sweep and allow Demopolis to advance in the playoffs.

Three hits were all the visitors could muster as dominant pitching aided the Tigers to a series sweep over the 5A Area 5 runner-up Alabama Christian Academy in the AHSAA baseball playoffs.

“That’s what I like. That’s just the bottom line. I like that quality start pitching and I like them to go. But a 1-0 game, you don’t see those anymore. I’ve always felt like I could manage 1-0, 2-1 games. I have a hard time managing the 10-8 games. That’s kind of how the game was when I came along. It was low scoring,” Demopolis coach James Moody said. “Unbelievable starting pitching tonight; three hits in 14 innings. What can you say?”

During the day Moody, noted how important younger players have been for his squad especially on the bases during that first game.
Sophomores Demetrious Davis and Andrew Patterson both scored runs for DHS in the doubleheader opener and Davis also stole two bases.

“I think our young kids are making a difference for us. At any given time, we’ve got three sophomores out there and we’re pinch running some sophomores. Everybody is contributing,” said Moody.

Colyar (8-6) pitched a complete game giving up just two hits and striking out three batters.
“It was a quality start. He threw the ball up there and let them hit the ball on the ground. I thought he was down most of the day,” Moody said. “He struggled in the middle with his breaking ball but made some adjustments on it and was good enough to recover and find it later and give himself a chance to finish the ball game.”

Offense was hard to come by in game two as the Tigers claimed a 1-0 victory.
Yelverton knocked in the only RBI with a double score Wesley Holeman.

Yelverton (8-4) also got the win on the mound, giving up one hit and amassing nine strikeouts.
“He just got in a rhythm,” Moody said. “He was around the zone. He probably threw 93 percent fastballs tonight. I’d have to check it out, but I think he probably threw about 10 sliders. Just command of the zone.”

Next on the agenda for the Tigers is a rematch from the second round from last year as Marbury comes to DHS on April 29.
Marbury has already provided sufficient motivation for the Tigers.
“I think we will be better prepared because of last year. I just think it is the approach of we’re back where we want to be,” Moody said. “There’s something that has been stuck on our door all year that somebody put on there and we still don’t know who put it on there. And our kids see it every day when they come out. I couldn’t tell you who put it on there. The kids don’t know. I don’t know. But I’m excited that we have another week to play and practice.”