DHS Soccer advances to third round 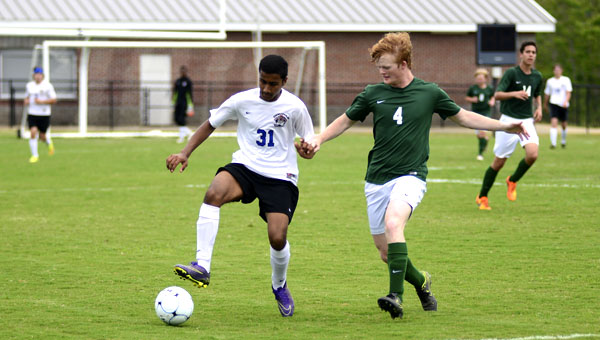 Smit Patel tries to setup the Demopolis attack against Holtville. DHS won 10-0 and Patel finished with a goal.

Demopolis High School soccer has yet surrendered a goal this post season after earning a 5-0 victory at Marbury High School on Tuesday, May 3.

Cristian Velez and Zachary Chu both scored goals to round out the scoring in the contest.

It was Chu who led the way with three goals as DHS soccer played just over 78 minutes of the contest when Joseph Barnes connected with a goal to enact the mercy rule in the 10-0 victory over Holtville on April 30.

“We hadn’t played an entire game in a long time with our ones, so we were a little inconsistent at times,” said coach Bert Rice. “I think, when we had to show up, we did. Overall, I think it was a pretty good effort and a pretty good performance.”

Brooker and Velez both scored two goals each while Alex Maravilla, Smit Patel and Barnes each scored a goal.

Next up for the Tigers is a tough matchup against Helena (15-7-2) who entered the post-season as the second ranked team in 4A/5A. Game time is currently scheduled for 5 p.m. on Saturday, May 7.