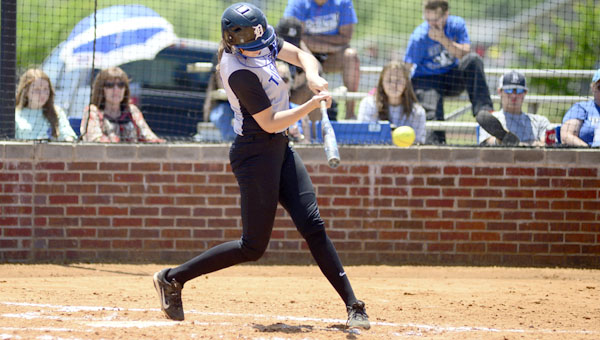 Abbey Latham finished with two homeruns and 6 RBI in two games versus Dallas County in the 5A Area 6 Tournament.

Natalie Tatum started the day in the circle for the Demopolis High School softball team with a no hitter. Then Kayla Montz finished it with a perfect game as the Lady Tigers defeated Dallas County twice to clinch the 5A Area 6 Tournament on May 04 and a berth into the regional tournament.

“Our pitchers are doing their job well,” said Demopolis coach Brittany Dunson. “They’re spinning the ball, hitting their spots which is great. They’re doing what they practiced for.”

DHS (22-12) scored in eight of nine innings of work on offense during the double elimination tournament invoking a rule in each contest.

The Lady Tigers took the first game 12-0 in five innings thanks to a monstrous five-run fourth frame.

In that inning, Tatum knocked two runs on a double to score Courtney Smith and Napoleon Roberson. Bria Brown then hit a line drive to leftfield to score Abbey Latham and Jessica Adams scored as well to push the DHS lead to 11-0. Brown capped the scoring when she crossed home plate on a fielding error that allowed Taylor Smith to reach base safely to push the score to the final 12-0 margin.

Latham led the way offensively in game one with going 2 for 2 including a 2-run homerun during the first that helped her finish with 4 RBI. Bria Brown finished 2 for 3 with 3 RBI. Taylor Smith turned in a 2 RBI effort along with Tatum. Courtney Smith finished 3 for 3 with two stolen bases, three runs scored and an RBI.

Tatum (12-9) pitched four innings in her no-hit effort with five strikeouts and just one walk.

After surviving an elimination game, Dallas County was tasked with facing Demopolis once more and this time the Lady Tigers came away with a 9-0 victory.

While the offense was not as prolific as in the early contest, the Tigers managed to garner six hits as opposed to taking nine free bases.

Latham, Kendall Hannah and Courtney Smith all finished with a hit and 2 RBI. However, Latham’s hit was her second homerun of the day and tenth of the season and came in the second inning of this contest.

Courtney Smith amassed three more stolen bases in game two to give her five for the day.

Montz (6-1) built upon Tatum’s work in game one and kept Dallas County hitless against the Tigers, going five innings with nine strikeouts in her perfect game effort.

Courtney Smith, Abbey Latham, Natalie Tatum, Kayla Montz and Bria Brown were all named to the 5A Area 6 All-Area Tournament team with Smith and Latham being crowned co-MVP’s of the tournament.

The Lady Tigers now prepare for regional tournament action in Troy on Thursday, May 12. While proud of the team’s effort, Dunson recognizes that there is work to be done before the trip.

Dunson said, “Mostly getting the middle of the ball. We had a lot of pop flies that should’ve been out, but we got lucky today. We have to square the ball up better.”

Time and opponent will be released and posted when the information becomes available. 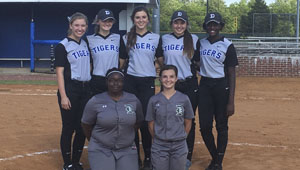 Kayla Montz, Courtney Smith, Abbey Latham, Natalie Tatum and Bria Brown were named to the 5A Area 6 team and are joined by Dallas County representatives Yasmeen Fletcher and Tori Hatfield.