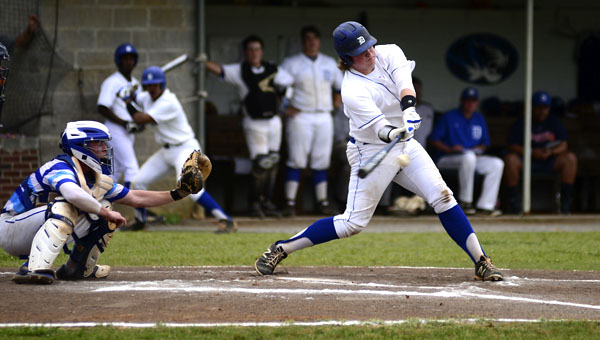 From there the Tigers never looked back and went on to sweep Marbury in a highly emotional doubleheader April 29 at the DHS Baseball field.

“It’s very humbling to me to be a part of that. It’s all about the kids. The kids play the game. The kids win the game. It’s a credit to a lot of teams in the past that were close and didn’t get over that hump,” Demopolis coach James Moody said. “I think the thing about his bunch is that nobody much gave them a chance. I’ll be honest with you. We had a freshman and a sophomore in that game and everybody is just stepping up. It’s huge for our program. It’s big for our school and our community. It really is.”

DHS (18-8) took the first lead of the day in the bottom of the second when Luke Yelverton doubled to knock in Jonathon Lewis for a 1-0 lead.

From there Marbury scored four runs in the top of the third and a run in the fourth and fifth each to nab the 6-1 lead and setup he dramatic conclusion.

Demetrious Davis got the rally started with a single to centerfield that scored Wesley Holeman and a fielding error would also allow Yelverton to score and cut Marbury’s lead to 6-3.
T
hen with the bases loaded in the seventh, Ryan Morrison reached on a fielding error as R.J. Cox scored and then a throwing error by the first baseman towards third base allowed Charles Casper to score to bring the score to 6-5.

Yelverton then singled to drive in Lewis for the second time in the contest to tie the game at 6-6 and send it to extra innings.

Moody said of Yelverton, “He has done a great job for us all year. He has really worked hard on shortening his swing and just letting the barrel to the work for him. When he does that, he does things like he did tonight.”

After a quiet eighth, DHS loaded the bases in the ninth after Yelverton was intentionally walked for the first of two times on the night.

Jamarcus Ezell made Marbury put some respect on his name with a single to centerfield to Lewis for his third and game clinching run.

Morrison (2-1) didn’t start the game, but earned the win pitching 4.2 innings and allowing only one hit with three strikeouts in the relief effort.

“Outstanding job. Unbelievable. He treated the game as if it was 0-0,” said Moody. “I talk to our guys about the importance of people that don’t start the game coming in and making a difference in the game. He took that to heart, I believe. That’s as fine a job in a pressure situation as I can ask for.”

Yelverton, who finished 3 for 4 in game one at the plate with 2 RBI, was on the mound for game two and only allowed three hits and amassed nine strikeouts in a complete game shutout 2-0 victory for the Tigers.

As a member of last season’s team that lost to Marbury, it meant a volumes to secure this victory.

“We actually put a picture up in the locker room that a girl from Marbury had posted. It’s a picture that said, ‘Did the Tigers even show up?’ Every day when we headed out to practice, it was a picture that we saw,” Yelverton said. “Of course we want to go past this, but that’s what we were building up to was this game right here and it couldn’t be bigger.”

DHS scored both runs in the fifth when Allgood scored on a passed ball and Ezell scored on a sacrifice fly by Chandler Barton.

“We just kept competing and putting the ball in play. We got some big hits in some big situations. There’s no quit in them against a very good baseball team,” Moody said.

Demopolis returns to action Friday, May 6, with a doubleheader against Rehobeth starting at 4 p.m. at the DHS Baseball Field.