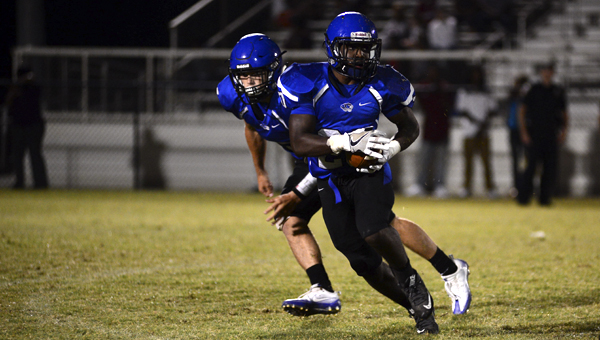 Antonio Besteder takes a handoff from Logan McVay during the spring jamboree against Thomasville on May 13. Besteder and McVay combined to lead the Tigers in rushing and scored both touchdowns against Thomasville. Both are new starters on offense for the Tigers who lost several playmakers and will look to reload on offensive talent in advance of the upcoming season.

For the first time since November, the lights at Tiger Stadium illuminated the field for Demopolis High School football on Friday, May 13 when the Tigers hosted Kemper County (Miss.) and Thomasville for a spring jamboree.

“We played two pretty good football teams tonight and it was physical and that’s always good,” said Demopolis Head Coach Stacy Luker. “That was our goal for this game, to have it as physical as it could possibly be and it was.”

The format of the jamboree saw the junior varsity squads from all three teams play 12 plays on both offense and defense and then the varsity squads play each other for a half for each matchup.

DHS and Kemper County kicked off the night with the Wildcats taking a 14-0 victory over Demopolis.
Antonio Besteder rushed for 55 yards on 13 carries and Logan McVay took seven carries for 24 yards to lead the Tiger offense.
Kemper County outgained DHS 175 yards to 132 yards.

Later in the evening, the Tigers faced traditional rival Thomasville for a half and came away with a 14-7 victory.

DHS took its first possession of the contest down to the two yard line, however Thomasville came away with an interception by Quinton Brown to stall the drive at the 2-yard line.

On the next Demopolis possession, Besteder broke free in the middle of the field for a 47-yard touchdown and give the hosting Tigers a 6-0 lead.
Thomasville responded with a long touchdown drive to take a 7-6 lead.
DHS fired back when McVay broke free 69 yards down the sideline for a touchdown. The quarterback then scored a two-point conversion to push the lead to 14-7.

“I thought we were physical in both halves. We broke a couple of long runs offensively and were able to get off the field defensively which is good,” Luker said. “We were missing A.J. Jackson, so I thought William (Wilkins) and Antonio (Besteder) both ran hard tonight and Logan (McVay) had a good game.”

Thomasville made a late push to try to tie or win the game, but Alexander Besteder shut that down with interception with 1:03 remaining in the game.
On the night, AJ Besteder led the Tigers in rushing with 26 carries for 141 yards and a TD. Logan McVay finished with 13 carries, 122 yards and a TD rushing. William Wilkins added 7 carries for 26 yards.

“It was a good night,” said Luker who turned his focus into where the team needs to improve. “We need leaders, team chemistry. Just a lot of stuff that’s hard to get in two weeks and there’s a lot of work to be done for Demopolis High School. We’ll go to work this summer and it’ll be okay.”

The Tigers begin the 2016 season in Montgomery at the Cramton Bowl as a part of the Champions Classic against Hillcrest-Tuscaloosa on Thursday, Aug. 18.