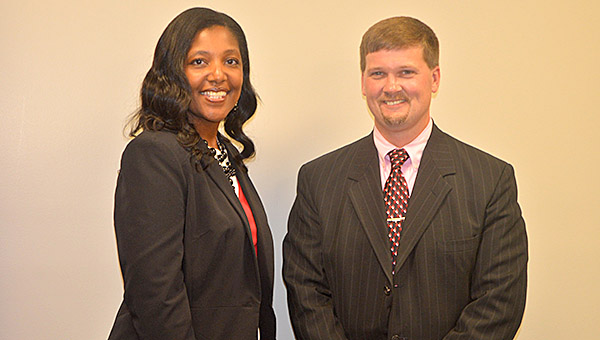 Demopolis Superintendent Kyle Kallhoff with Roshanda Jackson who was named the new principal for Westside Elementary School during a school board meeting Monday.

Westside Elementary has a new principal as the hiring of Roshanda C. Jackson was approved by the Demopolis School Board Monday.

Jackson comes to WES after serving as principal at J.E. Hobbs Elementary School in Camden since January 2012.
The new principal at WES will assume her duties on July 1, taking over for Tony Pittman who moved to the high school to serve as assistant principal and athletic director.
Jackson graduated from Clarke County High School before earning her bachelor’s degree in Elementary Education from Alabama State University and receiving her master’s in Education Administration and education specialist degree in Instructional Leadership both from the University of West Alabama.

The board re-elected Conrad Murdock to his position as chairperson and named Carolyn Moore as vice-chair.

Superintendent Kyle Kallhoff presented Lauren Reid of the Autism Society of Alabama with a $1000 check on behalf of the system representing money raised during the Autism Awareness month in April. Kallhoff also mentioned that each campus will receive $990 in special equipment for use by autistic students.

Kallhoff opened the meeting by honoring retiring teachers and staff from throughout the system. Those honored at the meeting include Vicky Thorne, 15 years; Geraldine Walker, 17 years; Jeannette Rainey, 18 years; Dr. Tony Speegle, 31 years, and Patsy Cullman, 41 years. Lilly Granger and Stacy Luker are also retiring, but were not present at the meeting.

Floy Mayberry was sworn in as the newest member of the board during the opening moments of the meeting by the superintendent.

The board agreed to advertise for teachers at the elementary, middle and high schools to be prepared for teachers who may choose to leave or accept other positions. This way the system will have applicants to replace those spots.

During his report, Kallhoff mentioned that system will receive more earned units and thus will receive more money from the state to pay for teaching units in the fall due increased enrollment during the school year.

The superintendent also highlighted the senior class by mentioning the upcoming graduates took a “Senior Walk” though WES and U.S. Jones Elementary School for the first time. These events have become popular on social media recently and serve as a way to inspire young children and allow seniors to feel some nostalgia as their time in grade school winds down.
Kallhoff mentioned how proud he was in the Class of 2016 as the group had earned $5 million in scholarship money.

In action items, the board approved the following:
• A paper bid from Newell Paper Company for $16,897.50
• The Alabama State Department of Education approved science textbook list. Each school will select the books it would like to use from that list.
• A bid from Howard Technologies to upgrade the system’s wireless infrastructure for $288,199. The actual cost to Demopolis will be just under $60,000 thanks to a federal “erate” that will reimburse 80 percent of the cost to the system. The bid is $12,000 less than originally budgeted.

In personnel action, the board approved:
• Dylan Parten, former Tuscaloosa County Teacher of the Year, hiredas a science teacher at Demopolis High School.
• Virginia Goodlett to transfer from 12-month assistant principal at DHS to 12-month assistant splitting half time at WES and U.S. Jones effective July 1.
• Resignations of Laura Rouse at WES and William Rouse at DHS.
• Non-renewals of Dawson Tubervile at DHS and Robert Peterson at DMS.
• Employment of William Jackson as additional custodian from June 1 through Aug. 5 as needed at $7.33 per hour.

Summer office hours begin next week at the DCS central office and will run from 7 a.m. to 4 p.m. Monday through Thursday and 7 a.m. to noon on Fridays.

The next board meeting is scheduled for Monday, June 13.