DHS Bids Farewell to Class of 2016 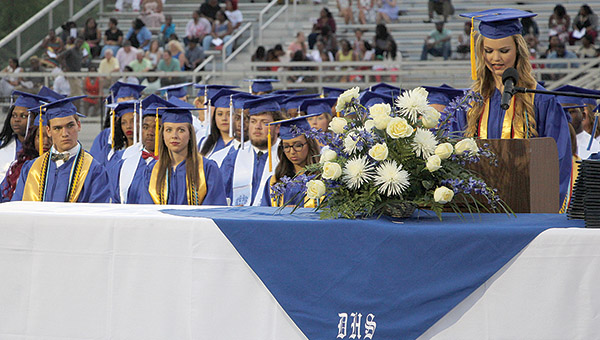 Commencement for Demopolis High School’s Class of 2016 was held Friday, May 27, at Tiger Stadium. About 160 graduates received their diplomas from DHS Principal Chris Tangle during the event. Speakers for the event included Class Valedictorian Shoni Jones, above, and Salutatorian Logan Etheridge.

Tangle also announced during the event that the class received over $5 million in scholarships, including academic, athletic, civic, and military scholarships.

The invocation was given by 2015-16 Senior Class President Alexis Mishawna Benderson. Also participating in the awarding of diplomas was DHS Assistant Principals Virginia Goodlett and Adam Sealy, and Demopolis School Board Chairman Conrad Murdock.

The Class Motto for the graduates was “You do not have to know where you are going as long as you are on your way.” Class flower was the white rose and the class colors were royal blue and gray.