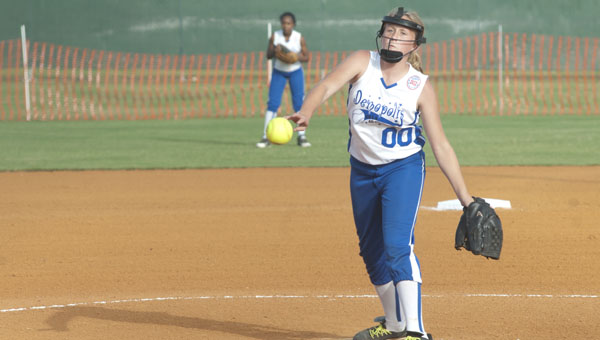 Mazzy Marlowe pitches for Demopolis in the 12U softball all-star a couple of years ago. This year, Demopolis prepares to host the USSSA tournament.

Demopolis will be home to an influx of young athletes and families starting Thursday, June 16 through June 18 as the city will host 32 teams as part of the United States Specialty Sports Association Fast-pitch Softball West-Central Area Tournament at the Demopolis SportsPlex.

Teams from as far north as Vance to as far south as Jackson will converge in Demopolis to battle for a chance to move on to the next round.

“It is tremendous for Demopolis! It can bring do much revenue,” said Demopolis Youth Softball board member Carrie Jackson. “The potential is if we do a good enough job as a SportsPlex and city, we have the potential to get this tournament every single year. That’s huge.”

The 8U, 10U, and 12U teams kickoff their double elimination tournaments Thursday night at 6 p.m. and will run until Saturday.

Since the 8U and 12U brackets have more than eight teams competing, the top six will advance to the state tournament. The 10U bracket features exactly eight and will have four teams advance to the next round.

Only two teams each qualified for the 6U and 15U age brackets, those tournaments will play a best of three games format on Saturday starting at 1 p.m. where the winner will advance to the state tournament.

All teams who advance from this tournament will play in the state bracket in Calera.

Admission is $5 per person over the age of 12 and free for children under 12.

Alongside regular concessions, the tournament will have food vendors that will sell items such as ice cream, snow cones, chicken tenders, boiled peanuts, pizza, a taco stand and other items available for purchase according to Jackson.