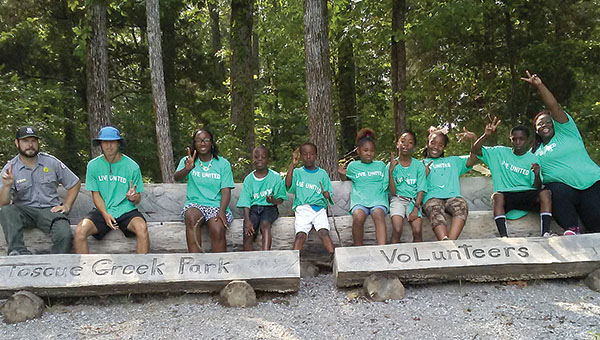 Each year, volunteers from various communities gather under the United Way banner for a day of community service. On June 17, residents of the Demopolis area joined forces for the 2016 United Way Day of Action.
“It was a community need and focused on helping to get the community involved to volunteer,” said United Way of West Alabama Community Needs and Partnership Developer Tiffany Smith.
The day started at 9 a.m. when children and adults from the Aletheia House Summer Camp at the Theo Ratliff Center volunteered with the U.S. Army Corps of Engineers at Foscue Park.
Ratliff Center Director Edward Ward and team leader Mentral Ledbetter helped with facilitating the youth and adult volunteers while West Alabama Public Transportation took them to and from the park.
Then, from 12:30 to 2:30 p.m., volunteers met at Braxton Senior Day Care to paint lawn chairs to provide seniors a place to sit outside.
“Mrs. (Annye) Braxton greatly appreciated it and the senior citizens love it now that they have proper lawn furniture,” Smith said. “They can sit outside now that they have better furniture and not be stuck inside. They can barbeque, picnic, play games or anything.”
All supplies were donated by Marvin’s Building Supply with the help of Store Manager Andre Goines.
Smith said it was a great day of service in Demopolis.
“It was a great success. The people we helped greatly appreciated it, the U.S. Army Corps of Engineers liked that we helped get some of the load off of them and the Braxton Senior Day Care staff and senior citizens loved it,” Smith said.
This was Smith’s first event with United Way of West Alabama after accepting the role previously held by Kathryn Pearson, whom Smith thanked for her time and dedication to the area.
“I learned a lot,” Smith said. “I learned that the community is very willing (to help), they just need to have a need. Volunteers are out there and waiting to build the community if they have the right leader.”
United Way Day of Action is a worldwide annual event in which thousands of people in local communities volunteer through United Way to make the world a better place.