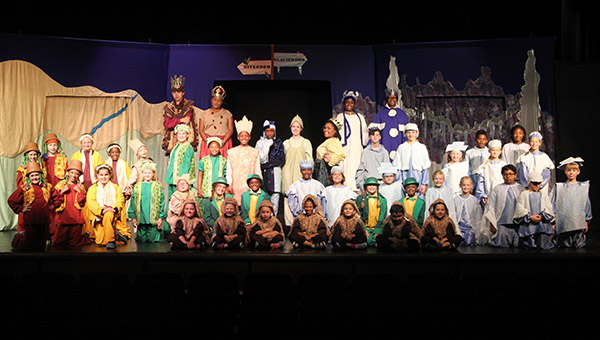 The cast of Missoula Children’s Theatre’s presentation of “The Princess and the Pea,” performed on Friday, July 1.

On Friday, July 1, the Missoula Children’s Theatre presented “The Princess and the Pea” by Michael McGill at the Demopolis High School Auditorium.

Under the direction of Katie Gehrmann and Christopher Martin, the students spent the week, beginning June 27, auditioning and learning their roles for the production during the fourth week of Demopolis City Schools 21st Century Community Camp.

For Martin and Gehrmann, the trip to Demopolis represented a unique opportunity to interact with the youth of the area.

“When I came here, I had never heard of Demopolis, Alabama, but I have family in another part of Alabama that I don’t get to see very often. In this town, I noticed all the kids came up to me and said, ‘yes sir’ and they said to Katie ‘yes ma’am’ and that’s not how it’s done where I’m from so I was surprised at the initial meeting with the kids,” said Martin about the children of Demopolis. “I was thinking, ‘Wow that’s cool that they have really good manners’ and throughout the week, you could see just little things in their body language when they knew they weren’t supposed to be doing something.”

Gehrmann said, “This was the easiest audition I’ve done ever, because they were just all really respectful and listening and paying attention to who was saying a line during the audition.

Martin is originally from Detroit, but currently lives in Illinois and is working on his Master’s in Acting. Gehrmann is from Madison, Wis. and recently graduated from Viterbo University in La Crosse, Wis.

While both enjoy working in children’s theatre, they both recognize the challenges associated with working with the age range.

“It’s challenging and it’s definitely work and we have to be strict with the kids, but we do it because we know that’s how they will succeed at the end of the week,” said Gehrmann about her interaction with the children. “That’s what’s most rewarding for me is watching them succeed. It is challenging every once in a while, having to be the bad guy and having to make them listen and pay attention.”

Martin mentioned that the experience of the children helped enhance the stop at DHS saying, “It’s actually a lot of fun. The kids come in with a good energy and they’re ready to be in this play. About half of them have done Missoula in the past years, so they’re really excited about the experience and they come really respectful especially here in Demopolis.”

The duo was in charge of directing “The Princess and the Pea” which explored what happens when a prince from a wintery kingdom tries to find a princess along with her friend “The Pea” who come from a kingdom will green rolling hills and running rivers.

This project is partially supported by the National Endowment for the Arts. Supported in part by a grant from the Montana Arts Council, an agent for the State Government. 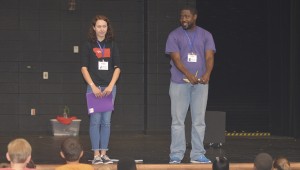 Directors Katie Gehrmann and Christopher Martin talk to the participants of the play before a break in rehearsal.

(This article originally appeared in the Wednesday, July 6, print edition of the Demopolis Times.)