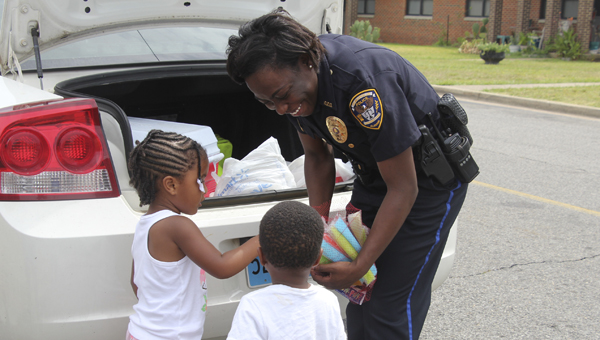 Demopolis Police Officer Serena Green is a big hit in local neighborhoods as she shares popsicles during her shifts.

The Demopolis Police Department and Officer Serena Green are doing their part this summer in helping locals beat the sweltering summer heat.

Becoming known as the “Popsicle Lady,” Green is passing out frozen treats to those she sees in the community in an attempt to build positive relationships with the youth in Demopolis

Green chose to distribute popsicles because it’s hot and it’s an easy way to help establish a connection during the summertime and plans to pass out popsicles throughout the summer. She is also considering other ideas for the colder months of the year.

The officer has been in law enforcement and working for the Demopolis Police Department for a year and three months and recently moved to the city.

“This was a dream of mine since I was a little child. I just want to keep the public safe. That’s all I want to do,” said Green on why it is important to be an officer and connect with youth. “Honestly, it’s not hard. I like it.”

“We are all very proud of Officer Green for what she has done by taking the initiative to do something that ties in with the community-based programs we’ve started here,” said Reese. “There has been a divide between law enforcement and the community for a number of years, not necessarily here but everywhere else across the nation.

“All over we’re not bad. We have good officers that try to do the right thing, but there are individuals in every profession that have issues,” Reese added.

The cool treats have been a positive hit with the children in Demopolis who come running when they see the “Popsicle Lady” driving through on usual shifts.

Instead of running from police cars, children are running to the car with a cheerful smile and thankful parents looking on as Green hands each child a cold, tasty treat.

“I want the children to know we are on their side and it’s OK to call us if something happens. It’s what they need. Children are scared of the police officers now,” Green said.